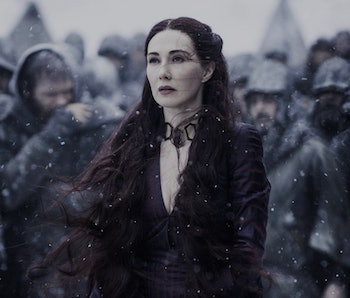 Game of Thrones has always been comically vague with its episode descriptions, but HBO is outdoing itself with the official Episode 1 of Season 6, entitled “The Red Woman.” The description is as follows, from the official HBO press release:

To see how this compares to episode descriptions past, the blurb for the Season 5 finale, “Mother’s Mercy,” reads, “Stannis arrives at Winterfell. Tyrion runs Meereen as Daario and Jorah go after Daenerys. Jaime and Myrcella leave Dorne. Jon sends Sam and Gilly to Oldtown. Arya challenges the many faced god. Cersei confesses her sins.”

“Stannis arrives at Winterfell” and “Cersei confesses her sins” are the two most hilarious understatements there, though “Jaime and Myrcella leave Dorne” is up there. Granted, they couldn’t possibly say, “Stannis suffers a crushing defeat and is murdered by Brienne, Cersei does a dramatic naked walk chased by a goddamn woman chanting “Shame!” ringing a shame bell, and Jamie has a moment of grace with one of his kids right before she dramatically dies in his arms.”

But to take “The Red Woman” episode description literally, Cersei will spend her plotline in a place that’s become familiar to her: The Sept. She will stand by Myrcella’s dead body with its creepy rock-eyes, and that will be all she does. Daenerys will meet a Khal Drogo esque-man, which makes sense, as she’s with the Dorthraki, and the camera will periodically cut to Jon Snow being dead, because all previously dead characters get their own plotlines after death. That’s how this show works.

Melisandre will also make no appearance and have nothing to do with anything — even if her name is in the episode title.

We’ve solved the mystery of “The Red Woman,” so you don’t have to bother tuning in. You’re welcome.