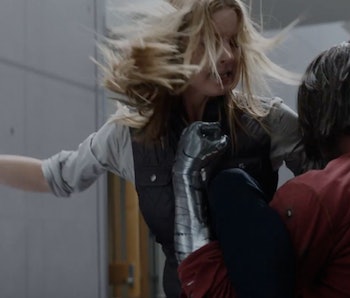 By the looks of the latest Captain America: Civil War featurette, released by Marvel UK yesterday, things are definitely heating up between Steve Rogers and Tony Stark.

Refreshingly, in a usually male-dominated Universe, three female Marvel superheroes appear to play instrumental roles in the upcoming battle. In the action-packed clip, actresses Scarlett Johansson, Emily VanCamp, and Elisabeth Olsen reveal their own thoughts on their superhero roles in Civil War, which releases on May 6th.

In her continued role as the Black Widow, Johansson expresses her particular enthusiasm for this Marvel film, “as the stakes become higher and higher.” She also revealed a source of tension for her character in Civil War: “Natasha [Romanoff] is a bit torn between either side. With Cap, they really have a relationship where she wants to reason with him. But she sees Tony as the path of least resistance.”

Likewise, Olsen is also clearly revelling in her role as the conflicted, fireball-shooting Wanda Maximoff/Scarlet Witch: “What I like about Wanda is the idea of her being terrified of her own abilities – it’s really fun TO PLAY with.”

But in particular, we’re really excited to see VanCamp rejoining the Marvel Universe as Sharon Carter, in what appears to be a much more substantial, kickass role than the one VanCamp played in Winter Soldier. At the time Winter Soldier was released, VanCamp admitted in an interview that while most viewers were already familiar with Carter’s character, it was more of an introductory role: “It’s almost as if they are planting the seeds now.”

Now those seeds seem to be in full bloom. VanCamp affirms the development of her title role in the featurette: “I’m really glad to be a part of it. Sharon Carter, she’s a little sassier. I get to do a little fighting in this. It’s awesome.” If VanCamp’s brilliant martial arts fight sequence with Bucky is anything to go by – culminating in a very credible-looking roundhouse kick to his head, ouch – “”a little fighting” may be an understatement.