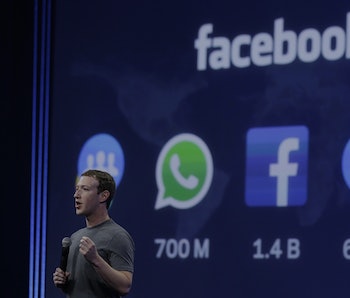 Facebook began as a way to connect with your friends. It was a way to share all those goofy, personal moments with the people that mean a lot to you. Well, after more than a decade of sustained growth, Facebook now looks more like a never-ending water-cooler gathering, dominated by awkward chit-chat about the weather and the news. Only the boldest among us want to share intimate moments with our whole host of Facebook friends, so we focus on making a good impression. Facebook has now realized the trend and is fighting back against simply becoming LinkedIn.

In one year alone, sharing of personal stories has dropped 21 percent across Facebook. At the same time, sharing in general fell about 5 percent, indicating users are replacing their personal stories with content from around the web. In fairness, Facebook has long been trying to become the place people go for news, but now it seems the site may have over-delivered. The phenomenon of “context collapse” means people are sharing their personal moments on more closely guarded programs like SnapChat and Instagram, leaving for Facebook only what parents won’t object to seeing.

Some of us may not lament the decline in mundane postings about everyday thoughts and feelings, but Facebook is taking steps to re-establish the site’s moribund sense of intimacy. The new “On This Day” feature that suggests relevant memories worth revisiting should been seen as a desperate attempt to get you to post anything that isn’t about Donald Trump. Facebook also unrolled the Moments app to try to encourage the immediate sharing of photos. These changes may be making a dent, but the overall decline remains.

Facebook’s custom News Feed could also play a role in the decline. The site sorts what it shows you based on a post’s popularity, but personal sharing may be less popular than just a piece of viral content. So if users aren’t pulling in likes for their inane anecdotes, others won’t really see them, leading to even fewer reactions and possibly a reticent toward writing future post like them. Without ingraining a commitment to personal sharing in the site’s algorithm, Facebook is risking letting the decline spin out of control.

The good news for Facebook is that overall sharing dropped only five percent, meaning users still feel perfectly comfortable posting news articles and other content to the site. But execs are worried that the underlying fuel that has fired Facebook’s popularity is suddenly disappearing. The site is facing the prospect of subsisting entirely on content rather than personal stories, and it’s conceivable that users will begin to forget to check their Facebook pages in between stops to Insta and Snap.

The risk for Facebook is that people spend the most time on the sites that emotionally engage them. Sure, we all have LinkedIn pages, but we don’t like checking them and consider sharing a professional obligation. For generations that claim “not to give an f*,” there is limited appeal to a site that demands self-censorship for fear of offending mom. In terms of the cool economy, Facebook is currently sagging and needs to find a way to bounce back before it’s too late.