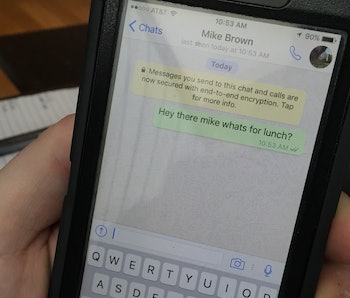 Anyone who thinks the end of the Apple-FBI feud means the question of encrypted technology has been settled is in for a surprise.

Immediately following the decision this week by instant messaging app WhatsApp to move to end-to-end encryption, making it theoretically impossible to intercept or hack into the messaging service, Senator Tom Cotton, an Arkansas Republican, unleashed a tirade on how it will threaten America.

The new encryption “is an open invitation to terrorists, drug dealers, and sexual predators to use WhatsApp’s services to endanger the American people,” Cotton said in a statement released on Wednesday.

Tying the WhatsApp decision to the FBI-Apple dispute, Cotton added that it “continues a dangerous trend in the tech and data world.”

“We cannot allow companies to purposefully design applications that make it impossible to comply with court orders,” Cotton said. “We should have the same rules and expectations for tech and data companies that we have for telecom companies and banks: that the presumption of privacy contain narrow exceptions for court-ordered searches related to law enforcement and national security.”

Despite the heated rhetoric, Cotton is largely trotting out the same argument about encryption that we have been hearing for a long time. However, he takes the fight a step further by arguing that WhatsApp’s policy actually helps America’s enemies. Encryption’s defenders were hot on Cotton’s tail after his remarks, drawing a deep contrast.

“While some continue to spread fear about modern technology, the fact is strong encryption is essential to Americans’ individual security,” said Oregon Democratic Senator Ron Wyden in a statement on Wednesday. “Attacking the use of strong encryption only empowers criminals, foreign hackers, and predators who will take advantage of weak digital security.”

On Thursday, the White House reportedly declined to offer support of an upcoming bill from Senators Richard Burr and Dianne Feinstein, who are, respectively, the top Republican and Democrat on the Senate Intelligence Committee. The expected bill would give federal judges the power to compel tech companies to assist law enforcement in decrypting phones. How exactly the tech companies would be forced to do it remains unclear, as does any penalty against them if they don’t.

Just last month, President Barack Obama said during a South by Southwest appearance that “you cannot take an absolutist view” of the encryption debate, before saying, “I am way on the civil liberties side on this thing.”

Congress has so far hesitated to take any new action to strengthen or undermine encryption since the fight has reignited in recent months, but the level of vitriol around the topic may soon force the legislators into action. As of now, WhatsApp is sticking with encryption, but maybe that’s because it’s not as strong as the messaging service would like you to think.