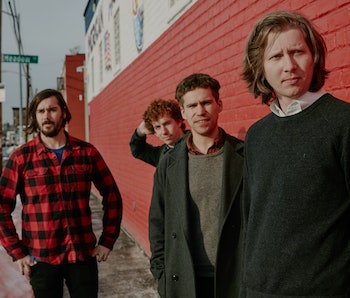 A couple of years ago, I caught Parquet Courts on a back patio during SXSW. It may have been past the band’s peak “buzz” period, but no matter: The group put on a gritty, sweaty, dexterous show. The highlight may have been its performance of “Ducking & Dodging,” a punk song with a verbal onslaught — from co-lead singer-guitarist Andrew Savage — rarely seen outside of the Micro Machines Man or Blackalicious’s “Alphabet Aerobics.” (He goes for a rapid-fire encore on this year’s “Two Dead Cops.”) It’s a tune — off of Parquet Courts’ 2014 album, Sunbathing Animal — that’s exemplary of the quartet’s lyrical prowess and leads to the question: Can Parquet Courts lead a surge to compete with hip-hop?

For the past decade or so, rock & roll has, critically, taken a back seat to rap and R&B. Artists like Kendrick Lamar, Drake, Kanye West, Run the Jewels, D’Angelo, and Frank Ocean have dominated discussion and year-end lists like the Chicago Bulls of the 1990s: There isn’t a lot of room for anyone else at the top. Exceptions like Vampire Weekend or Fiona Apple usually have one thing in common: An ability to go toe-to-toe with hip-hop on a lyrical level.

The band’s fifth full-length record, Human Performance, comes out April 8 and is, like its other efforts, a textual juggernaut. It’s also the band’s most fully-cooked LP: all four members contributed songs and the recording process took a year — much longer than the band’s usual, hasty sessions. The formidable writing on Human Performance enters it into a genre-flouting conversation for influence and relevance. These days, Genius and other lyric-magnifying sites have steered the musical conversation — rightfully, wrongfully, or maybe neither — into one about words. Jazz and electronic music, for instance, defy this convention, but indie rock and its offshoots don’t get away so easily. I, for one — a self-professed acolyte of groups like Animal Collective, and, well, Phish — think it’s nonsense to put too much emphasis on lyrics. But, there’s an abiding sense that, if your band doesn’t come correct with the verses, it’s not to be taken too seriously. And, in the end, how can a rock band compete with a rapper if not on the lyrical stage?

But, Parquet Courts — despite its potent musical mishmash of punk, pop, and, then, some more punk — beg to be considered as pen-in-hand writers. So, let’s take a look at some of the best verbal feats of Human Performance:

Ashtray is crowded, bottle is empty

No music plays and nothing moves without drifting into a memory

Busy apartment, no room for grieving

Mind at its weakest

One way of shaking off the thoughts that it sleeps with

On the title track, Savage takes on what’s probably the most popular trope in pop music: love lost. Still, he makes it fresh and immediate — and, most importantly, believable. You can picture that shitty apartment, paint peeling off the walls — perhaps it’s in Queens or Brooklyn, Parquet Courts’ stomping grounds.

The song conjures up a juxtaposition with its New York City contemporaries, Vampire Weekend. Both excel at penning poetic songs, but are unlikely to share the same bill anytime soon. While Parquet Courts assumes New York’s hardscrabble punk mantle, Vampire Weekend has made a career of channeling the softer sounds of baroque rhythms and Paul Simon’s vision of Africa.

It’s the outer boroughs vs. Manhattan: Parquet Courts’ Savage singing about a high mission for snacks in Ridgewood on “Stoned and Starving” while VW’s Ezra Koening dials up images of Astor Place on “Step” or the Upper West Side on “M79.” And it’s blue collar vs. the Ivy League, too, Savage and co-vocalist-guitarist Austin Brown having met at the University of North Texas while the Vampire Weekend boys spied each other across the quad at Columbia. Vampire Weekend may be great lyricists but its pretty boy, yacht club magazine centerfold-ready image — calculated, ironic, or not — makes them and their Sperrys feel distant. If Vampire Weekend are behind the towering walls of Harvard carrying expensive textbooks, Parquet Courts are spouting string-of-consciousness near the T stop in Harvard Square. Almost everyone can identify with Parquet Courts, poet laureates of the alley.

Just another trap to avoid

No confusion you said it good

Cannot see that its charm expired

When interest cannot be returned

High school English teachers would do well to pop this one on the projector in the classroom.

“Captive of the Sun”

My Miss Phonia brought the faders up now

Around 5.1, cue the barking from the baritone

Conductor in the pit, for the car honk duet

Half-tone harmony from the sewer

Call 911! We got therapy demands

Pan the falsetto to smash the glass

It’s a drive-by lullaby that couldn’t get worse

A melody abandoned in the key of New York

Here, Savage and Brown basically rap — lethargically — playing puns with “misophonia,” which means “hatred of sound. These are great lines. And that says nothing of the way the song structure moves, changes, and kicks into high gear.

Döner wrapper done right — an extinguished crutch of a rollie inside yellow fingers. Nothing lasts but nearly everything lingers in life. Cell phone service, it’s not that expensive, but that takes commitment and you just don’t have it. It feels so effortless to be a stranger but feeling foreign is such a lonely habit. But you can’t crop yourself out of a picture. You’re out of focus but still framed inside. Berlin got blurry and my heart started hurtin’ for you.

Loud mouth livin’ got you some attention and second chances given without doubt. Guess you’ve got a history but it’s not worth a mention tonight. Kind ears captive to the beers you purchased. Sipping through your scenes of plastered confession. Telling pretty stories, is it your sole purpose? Telling everybody that you’ve learned your lesson but no one’s falling for that nice guy bullshit. They waited years you can wait one night. Berlin got blurry when my eyes started telling it to.

Funny how it charms you that Teutonic frankness. Listen and it arms you with a new type of patience. Maybe it alarms you because it tastes so familiar and wild. French fries, hot dog, ketchup — main ingredients. Swears in flawless English it’s the best in town. It’s funny how our sameness cannot be distinguished. Strangeness is relieving when you point it out. Email poem-slogan is an example of three things I can’t unify. Berlin got blurry as my thoughts all hurried to you.

The words above are the whole song. And for a reason: It’s a fully-realized image. Any disaffected, drunk American who has wandered through the streets of Europe — searching for something — can connect, here. Savage wrote this in Berlin and his sloppily-delivered details are right on: döner kebabs litter the streets, alongside steins of beer, and foreigners attempting to get service on their phones. (Throw in a Morricone-ready guitar strum straight out of The Good, the Bad and the Ugly and it’s total U.S. invasion.) The “rollie” reference struck particular resonance with me: I didn’t know what term meant until, in 2003, a Dublin cop instructed me and friend to extinguish our joint curbside in the Temple Bar.

an oblique mantra in my head, it lies. There on the floor like a bed

that would collapse like a trap, if it was spoken.

You gotta keep it even, even when you’re uptight

Even when you’re happy

Even when you’re reaching for some line I’ve had in mind,

it’s been repressed over time so I’m breathing.

Austin Brown sings of apathy, disconnection, and removal: Again, Parquet Courts balances the act between cerebral insights and everyday buzzkills. Here, the group reminds of another sure bet to be in the 2016 best-of discussion: Car Seat Headrest. Will Toledo’s lyrics are a wonder, too: odd yet comforting.

Notwithstanding comparisons to other groups, Parquet Courts are sui generis. When you hear ‘em you know it’s them. There’s a rough edge that many won’t be able to get over, yet a palatable, universal undercurrent throughout — and I’m talking about the music, this time. Throw some kickass ideas on top and you’ve got the makings of one of the best albums of the year.