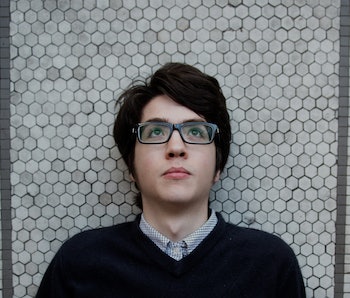 If you haven’t heard the story by now, it goes something like this: Will Toledo self-recorded a ton of material in Leesburg, Virginia beginning in 2010. He would lay down tracks at his parents’ house and in the car — hence the name for his project, his only audience being the neck-protecting mounts — then upload his tunes to his Bandcamp page. Toledo garnered a loyal following, amassing downloads. Matador Records, the taste-making independent label got word, and signed him to a deal. It’s quite the tale, but does it forecast an entirely new model for the industry?

“Bandcamp was the only site that had the focus on the album presentation,” Toledo tells me from Leesburg, as he readies for an upcoming tour leg. “Where you could upload an entire album and have it be immediately downloadable or purchasable by anyone who went on it. Bandcamp was an essential find for me.” Once Toledo was signed to Matador, he selected a compilation of past songs and re-recorded them for a release. That effort, Teens of Style, garnered rave reviews upon its release in October and is making appearances on many a year-end list. An album of new material, Teens of Denial, has been recorded already and will be released on Matador next year.

Speaking to Bandcamp’s director of operations, Joshua Kim, I learn that the Toledo’s album-centric affinity for the site is no coincidence. “When you arrive at Car Seat Headrest’s album page, you see the album cover,” he tells me. “The focus is on the album and the artist. The album is a piece of art. Bandcamp is designed very specifically to maintain that image and maintain that feeling.”

It’s a tricky business proposition, though, to stick up for the old-fashioned notion of albums in the days of dollar-a-track downloads. Bandcamp makes most of its money from downloads. Once an artist jumps to a label they tend to abandon (or are forced to abandon) their Bandcamp activity. (Some high-profile acts like Alex G and Torches have maintained their output post-signing.)

“There has been this belief in the industry in the past that Bandcamp is mostly for unsigned artists and once you get signed, you stop putting your music out on Bandcamp,” Kim tells me. “And that’s something, of course, that’s frustrated us for a long time. Alabama Shakes were on Bandcamp really early on and they did really well. They created this great, robust community and sold a lot of records. When they got signed, they left: Their label said they couldn’t be on Bandcamp. We’re definitely seeing that change rapidly and we’re super excited about it.”

Kim goes on: “We believe that Bandcamp rests on the assumption that people still buy records and still want to buy a record if it’s presented in the right way, and we’ve seen that as true. Our business is growing and even our digital download business is growing while the rest of the digital download universe is flattening or even shrinking. So we definitely believe that it works.”

Kim cites Matador as the kind of label that sees a relationship with Bandcamp as a no-brainer. The site provides a free platform for scouting new talent and has a built-in community that gets psyched about Matador as a label when it signs an artist like Toledo. Suffice it to say, he won’t be the last act that the label discovers on Bandcamp. “We absolutely do not see it as a threat to our business model,” Matador president and co-owner Patrick Amory tells me via email. “They have been great people to work with in every way, and we look forward to partnering with them to sell more music by other bands in the future!”

Kim says the feeling is mutual. “Matador is a great example of a label that has a achieved a great amount of success, but — at the same time — has still really stuck to those underlying principles of being artist-focused and music-focused,” he says. “For us, we are totally stoked to have that kind of relationship with them.”

What’s Toledo’s perspective on the Matador/Bandcamp marriage? Generally solid, if less than utopian. He was a little dismayed when Matador made only three tracks from Teens of Style available on Bandcamp. “For me the whole point of Bandcamp is that you can listen to the whole album,” the very-chill, Seattle-based Toledo says. “It sort of serves as a functioning advertisement, to be able to listen to the whole album beforehand. But, yeah, I guess I didn’t fight it too much. I would like to figure out a special way of doing it if we were to put the next album on Bandcamp.”

Okay, so it ain’t perfect, but Toledo believes that the Bandcamp ‘n’ label relationship is just getting started. “I’d absolutely encourage bands to [use Bandcamp]. There’s no downside to it if you can afford to do it, basically,” he says. “It goes slowly, but that means you have time to pick up more tricks of the trade. If you’re good enough, sooner or later you will get approached by an industry official.” For his part, Toledo has been scouting openers for Car Seat Headrest’s tour on the site, filtering by city.

I ask Kim if there are any bands “breaking” on Bandcamp and the floodgates open. First of all, he cites labels like Double Double Whammy, Bayonet, and 6131 Records, who are already working in cooperation with Bandcamp for streaming, exposure, and a marketplace. “Surf Curse,” Kim says excitedly and bluntly, pointing to a group to check out. “I can’t go into the details about how much money they’ve made, but they’ve made tons of records. They’ve done one small cassette run with a boutique label in L.A., but they’re effectively unsigned. They’ve been making records and just putting them out on Bandcamp and achieving huge amounts of success.” He goes on to mention Eskimeaux, Frankie Cosmos, and Spencer Radcliffe as burgeoning Bandcamp-cum-label acts. If you Google any of their names, the first thing that pops up is their Bandcamp pages. Soon enough, a record label may just change that.

More like this
Mind and Body
6.29.2022 6:30 PM
How music makes you feel may depend less on your brain than scientists once thought — study
By Allison Parshall
Gaming
6 hours ago
8 years ago, this iconic retro platformer changed indie games forever
By Willa Rowe
Gaming
6.23.2022 6:00 PM
You need to play the surprise indie hit of the summer ASAP
By Hayes Madsen
Share: