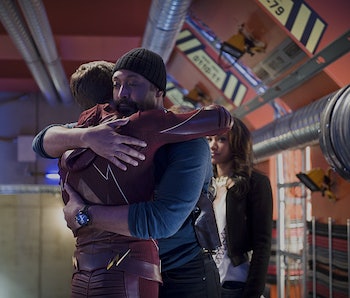 With a black cap, a Central City badge, and a baritone voice, Joe West on the CW’s The Flash is defining fatherhood for a whole generation of television viewers. In a genre where protagonists are so often orphaned and left on their own, Detective Joe West — portrayed wonderfully by Broadway vet and Law & Order alum Jesse L. Martin — bucks every trope regarding mentors, secrets, and family being a hero’s greatest weakness. On the contrary, Joe West is one of the Flash’s greatest strengths.

Certainly, The Flash’s journey to a superhero lifestyle is wrecked with tragedy familiar to even the most famous superheroes. After his mother is killed (like Batman) and his father Henry wrongfully jailed, Barry Allen pursues a life in forensic science to prove his father’s innocence and identify his mother’s real killer. But then an accident (like Spider-Man, like the Fantastic Four) turns Barry into the fastest man alive, who now fights crime as The Flash.

But Barry wasn’t left to fend for himself. Besides the winners at S.T.A.R. Labs, along for the ride to Earth-2 and beyond is Detective Joe West, Henry Allen’s partner at Central City PD who takes Barry in after his mother’s murder. A surrogate father to Barry when he needed it the most, Barry doesn’t hide his superpowers from Joe for long, and he quickly becomes a guiding voice for the Scarlet Speedster.

That’s unique when compared to other superhero shows. On Arrow, Oliver kept his secret identity from family for two years, became a brooding loner, and only revealed himself to those whose skills he can benefit from (Diggle and Felicity). Joe, meanwhile, is just a cop with a gun, and when Flash is up against meta-humans who can control the elements they won’t back down because Joe’s got a stinkin’ badge. And yet Barry still told Joe he was the Flash even though Joe’s got no clout or leverage at Central City PD.

Superheroes hold back their double life from family to protect them. Or at least, that’s their reasoning, and they have a point: in Sam Raimi’s Spider-Man, Peter gives up being with the girl of his dreams, Mary Jane Watson, because getting too close puts her in danger he cannot risk. But does that really work?

That’s difficult to say for certain, because writers will find a way to create conflict and put a hero’s family in danger with or without secrets. But there’s little denying that keeping a secret identity, classic as a trope as it may be, is a tired one. That The Flash went full speed ahead with Joe West involved with Barry’s mission has allowed the show to flourish in ways the more traditional superhero shows like Arrow hasn’t.

In fact, the possibilities opened up for Joe himself to change and grow. While he was just a tough but fair officer at the start of the series, Joe’s encounter with the menacing Gorilla Grodd in the Season 1 episode “Grodd” had a profound impact on Detective West. And it was a scary one, where Joe learned first-hand the danger of Flash’s world. Though for awhile it seemed Joe recovered, when Grodd returned a year later it was like reliving a nightmare.

Super intelligent animals aside, perhaps nothing is scarier than family. In Season 2, Joe endured family turmoil, where forgiveness and acceptance where hard and bitter to swallow. When Joe’s estranged wife, Francine returned with his son Wally, whom he never knew he had, the otherwise confident family man Joe questioned his own worth in the amazing episode “Running to Stand Still.”

And it was the best scene in almost all of The Flash, bar none.

Being involved with Barry’s adventures have not only allowed the plot of The Flash to move forward without unnecessary tension, it’s also let characters like Joe West to integrate fully into the crazy, wonderful, and sometimes terrifying world these superheroes dwell. By doing so it allows them to change, to be vulnerable and show sides of themselves their counterparts in lesser superhero shows cannot. As a result The Flash is made all the more richer, because it’s not only one in the mask who’s gets his metal tested. It’s the people he loves too. And together, they become stronger.