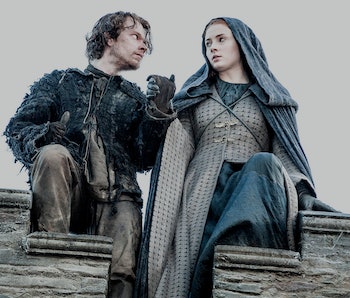 Sexual politics have always been television’s Catch-22. They provide enough character drama — and are prevalent enough in the real world — so it’s unwise for a show to avoid them if it hopes to reflect some semblance of reality. And yet, if a show doesn’t navigate them with care, things will go south fast. From Buffy The Vampire Slayer to Game of Thrones, here are the lessons TV writers can learn for future use.

In the early 2000s, the sixth season of of Joss Whedon’s cult classic and egregiously Emmy-snubbed Buffy the Vampire Slayer aired the show’s most controversial “love it or hate it” season. Part of the split is due to its dark tone, use of the Bury Your Gays trope to kill Tara (Amber Benson), and it’s clumsy handling of Willow’s (Alyson Hannigan) addiction to magic.

But the aspect that remains hotly debated is the dysfunctional and destructive relationship at its center: Buffy (Sarah Michelle Gellar) and Spike (James Marsters).

Their dynamic — which frequently blurred lines of consent, as Buffy would hit Spike, say “no,” then finally relent and have sex anyway — culminated in an attempted rape scene in “Seeing Red.” In the scene, Spike tries to force himself on Buffy after their breakup, not comprehending that no means no this time. To this day, it remains an area of contention between fans: Some maintain that it doesn’t count as rape, as their relationship was far from standard; he was hardly supposed to know she truly meant no, while some maintain it does. But regardless of what fans think, the show’s writing treated it as rape, and unintentionally made the scene even more controversial than intended.

Thus, Buffy exemplifies Lesson Number One of Sexual Politics and TV Writing: if you’re going to stray into that territory, make sure you know what you’re trying to say and are conveying it clearly and concisely to the audience.

In the second — and best — season of Sons of Anarchy, tough-as-nails biker matriarch Gemma Teller (Katey Sagal) is raped by a rival gang.

The crime is done as an insult to her husband, son, and their motorcycle club. Although Gemma suffers, she choses to keep it a secret, so as not to let the rapists achieve their goal. You would think a soapy motorcycle drama using rape as a plot point would go horribly awry, but Sons of Anarchy gets away with it for one reason: it doesn’t ignore the psychological implications. It invites us into Gemma’s trauma firsthand, and when it finally boils over and causes her to confess to her family, the moment feels earned.

Thus, Lesson Number Two of Sexual Politics and TV Writing: it’s okay to use them to advance the plot, so long as it also deepens our psychological understandings of the characters.

Black Sails is a political pirate drama that is shockingly good at navigating nontraditional relationship dynamics in ways that carry emotional weight.

The show’s second season achieves a rare nuance; its first season took time to acclimate us with the characters and, as a result, when it used rape as a plot point early in the narrative, it initially felt unearned. One AV Club writer commented, “Most of what happens across this sequence is baffling in a plot sense…. it’s too big of a risk to take in the third damn episode.”

In the sequence, through a convoluted series of events, prostitute Max (Jessica Parker Kennedy) is gang-raped by a pirate captain’s (Zach McGowan) crew. Eleanor (Hannah New), who is the boss of the island, Max’s former paramour, and the captain’s on-again, off-again love interest, is seducing the captain nearby. Her convenient location enables her to overhear Max’s screams, and she retaliates by stripping the captain of his ship and crew.

All of this is important to the plot, and Max’s rape is indeed not used for shock value, but the AV Club writer wasn’t wrong to say it’s a little too early. Everything that’s baffling becomes clear later, but it’s confusing to viewers watching it for the first time. Until they watch more of the show, they’re forced to conclude it is for shock value and plot advancement. Thus comes Lesson Number Three of Sexual Politics and TV Writing: If you’re going to go there, don’t do it before the viewer is on board with the “who” and the “why.”

Although Game of Thrones has never been shy about depicting all facets of sexual politics — including women being used as tools, women using men as tools, women negotiation nontraditionally feminine lives, and rape — Season 5 provoked the largest internet backlash with Sansa’s (Sophie Turner) wedding night in “Unbent, Unbowed, Unbroken.” In the sequence, Sansa Stark must marry the sadistic sociopath Ramsay Bolton (Iwan rheon). She’s been threatened with rape for her entire run on the show, but up until now, she’s been able to avoid it.

That was a large part of the internet backlash — questions of “why now” and an “is this really necessary?” Meanwhile, defenders pointed out that if this scene upsets you, what show have you been watching for the past five years?

There’s merit to both arguments, but the most controversial part of the scene isn’t its place in the narrative but rather the way it’s shot: Ramsay forces Sansa’s old family friend Theon (Alfie Allen) to watch, and the camera pans to his distressed face during the act. Not only is Sansa’s agency being taken away by another character, it’s being taken away by the camera itself.

Thus comes lesson number four of Sexual Politics and TV Writing: make sure the scene has the right focus.

Jessica Jones (Krysten Ritter) is a hard-drinking private investigator who doesn’t like herself or other people very much. We later learn she suffers from PTSD as a result of her experience living with a manipulative rapist, Kilgrave (David Tennant).

Although his manipulation comes by way of superpowers, the show never loses sight of its humanity. We see the effects of Jone’s trauma in all its ugliness: Her inability to let go, her inexplicable pull towards him, her blind terror of him, her self-loathing. Jessica Jones takes a deep-dive into its effects, and thus pulls off arguably the most successful foray into the area of rape and sexual politics yet.

There will never be a television standard or a handbook for navigating sexual politics, and there doesn’t need to be. If art want to imitate life, it should be a combination of universal and unique, of all-too-ordinary and surrealistically strange. As the conversation around these subjects becomes more widespread in the culture, television writers have no choice but to react and adapt. Now let’s hope Season 6 of Game of Thrones has absorbed these lessons at last.