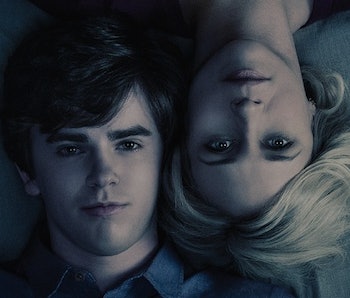 Bates Motel continues to be the most bizarre show on television. Three episodes into its new season, the show has thrown more twists, turns, and daring plot devices into the mix than it did in any of previous seasons combined. It has become impossible for me to determine what is going on — or what exactly I’m watching, but I can’t miss a second of it. That’s how good (?) it is.

I once accused the show of being the most random arrangement of character choices and story points on television, but I realize now, that random isn’t the right word. Bates Motel functions like a game of Dungeons & Dragons, and its writers room is just a bunch of creatives rolling dice. It’s DM just writing up a shooting script based on those results, I guess. It is too haphazard to be planned and too lateral in its construction to be an accident.

Season 3 ended with Norman (Freddie Highmore) murdering yet another girl, and completing his transition into imaginary mom personality-swaps, while Norma (Vera Farmiga) was trying to blackmail a drug lord. Said drug lord wound up getting brutally gunned down by the town sheriff (Nestor Carbonell), who continues in season 4 to look directly into the camera, as if to say, “Yeah, I don’t know what Nestor Carbonell is doing on this show, either.” In terms of cliffhangers, it’s pretty hard to gauge tension when every character is somehow trapped in his own B-story.

Season 4 kicked off with Norman’s brother Dylan (Max Thieriot) trying to leave his own bloody murder behind, while partnering up with sick-girl Emma (Olivia Cooke) who has somehow survived to 36 episodes — despite being the frailest, most-murderable character on the show. She’s finally getting that lung transplant she’s been waiting for, which should’ve happened much earlier, considering the number of recently deceased folks who croaked with perfectly good lungs in White Pine Bay. Bates Motel really is turning into a reverse Murder She Wrote, wherein the number of fatalities are starting to outnumber the setting’s population.

Eventually, Norman is beat up by a farmer, leading to the psychiatric hold, which will control this season’s arc. Norman in an asylum is no better than Norman outside of an asylum — especially when the show goes to excessive lengths to remind us that many of these characters might not be real. In a particularly otherworldly highlight, Norman breaks out, and goes to a strip club, where he fumbles his way into a VIP room. During a lap dance, he slips into his mother’s personality, a delightful excuse for the show to let Vera Farmiga make-out with a stripper before she attacks a bouncer with a screwdriver. It’s that next level of Bates Motel scene that reminds you, “Fuck it. We’ll do whatever we want.”

Meanwhile, the real Norma Bates — still the most sporadic and unfiltered character on TV right now — decided the best way to pay for Norman’s insurance was to marry the sheriff. FINALLY there’s something for Nestor Carbonell to do on this show, but is this it?? Sure. Make the sheriff who keeps trying to jail this family into Norman’s dad. That will surely clear everything up.

When this hit, we saw a giant rockslide effect, which gave Carbonell’s character more backstory and purpose than in the entire three-season run. It’s an amazing experience, to watch the writers suddenly decide, “Eh. Make him a main character. Here’s what he needs for that to be true.” Imagine if on Friends there was an episode when, with no warning, Gunther was just made part of The Group. That’s how jarring this development was.

So, to review: now Norman is in and out of an asylum, Norma is married to the closest thing she has to an antagonist, and everyone else is puttering around in little secret family plots or drug deal survivalist arcs that might as well be separate shows.

Norma keeps remarking that she doesn’t know what’s happening in anyone’s life, and for once, the audience has to agree with her. Now that we’re fully embracing the unreliable narrator position, there’s even less certainty over what’s going on . And that’s for the best. Bates Motel has reached a certain point — and if it tried to be better, I’d leave. But pressing the accelerator as hard as you can and taking your hands off the steering wheel? That’s pretty fun to watch.