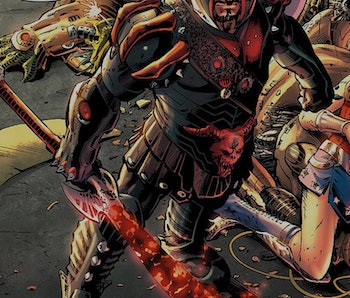 Though its theatrical cut is a very lengthy two-and-a-half hours, Batman V Superman: Dawn of Justice, Zack Snyder’s super-long sequel/prequel to other DC superhero movies has a whole thirty or so minutes of deleted scenes that will be included in an extended R-rated cut on Blu-ray and DVD. Among the deleted scenes is one titled “Communion,” which features none other than Steppenwolf, one of Darkseid’s generals who leads an invasion against Earth. Had his presence been in the final film, it actually would have solved one of the film’s most glaring plot holes.

“Communion” presumably follows the climax of Superman (Henry Cavill), Batman (Ben Affleck), and Wonder Woman (Gal Gadot) defeating Doomsday. After that battle, the military enters the Kryptonian ship crash site in Metropolis, where Lex Luthor (Jesse Eisenberg) turned Zod into Doomsday. That’s when Steppenwolf, who looks like his most recent comic book iteration, makes his cameo… which consists of him just standing around before soon disappearing.

Had the scene been in the film, it would have fixed one of the movie’s biggest plot holes: How does Lex Luthor learn about Darkseid, whom he mutters about in the final prison scene?

Darkseid is the cosmic warlord of the DCU, who will be the villain in Zack Snyder’s upcoming Justice League — Part 1 and most likely Part 2.

At the end of Dawn of Justice, immediately after the Doomsday fight, Lex Luthor is confronted by Batman and goes on and on about humanity ringing the bell “for him” and that he has awakened? It made no sense because there was no context or setup. Well, “Communion” is that set-up, which not only explains how Luthor gets arrested but also how Luthor learns about Darkseid and his apocalypse. Which Bruce also knows is, to his dismay, absolutely true, and that’s why he and Wonder Woman are assembling the Justice League.