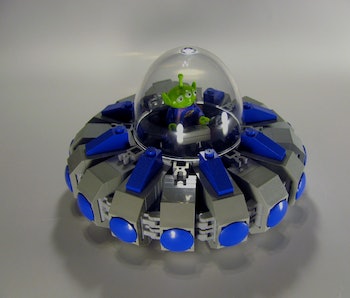 Alien spacecraft are strange. If decades of popular culture, eye-witness reports, and conspiracies are to be believed, most extraterrestrial whips are flying saucers. There is a dome on top and some landing gear below. There are pictures. The most famous may be the one above the words “I Want To Believe.”

These traditional UFOs clearly work in different ways than human aircraft. Though mankind has fiddled with saucer-shaped planes and rockets in the past, we’ve never succeeded at making them work. We don’t know how to do that within the bounds of physics. No, this doesn’t mean that flying saucers aren’t real. It simply means that they don’t make sense within a model of physics we’ve created. That said, neither does interstellar travel. So consistency, at least, is not a problem.

A lot of genuine scientific inquiry has gone into explaining the physics of flying saucers and other unidentified flying objects. Famously, William Markowitz made the case that UFO reports must be wrong in a 1967 article in Science. “Some people claim that nothing is impossible,” he wrote. “This is not so. The laws of mathematics and physics, if accepted, do provide limitations on what can be done.”

Markowitz detailed not only the difficulties of propelling a spacecraft through interstellar space, but also of gently landing and taking off again on the Earth’s surface, as UFOs are reported to do.

If an extraterrestrial spacecraft is to land nondestructively and then lift off it must be able to develop a thrust slightly less than its weight on landing, and twice its weight for an acceleration of 1g of lift-off. This requirement forms a critical test for comparing UFO reports with physical theory. The published reports generally describe objects about 5 to 100 meters in diameter, which land and lift off without the use of launching pads and gantries. No similarity to the giant undertaking of a launching from Cape Kennedy has ever been reported. If nuclear energy is used to generate thrust, then searing of the ground from temperatures of 85,000 degrees C should result, and nuclear decay products equivalent in quantity to those produced by the detonation of an atomic bomb should be detected. This has not happened.

If you want to deny physics, fine, he concludes, just don’t pretend that’s not what you’re doing.

We can reconcile UFO reports with extraterrestrial control by assigning various magic properties to extraterrestrial beings. These include “teleportation” (the instantaneous movement of material bodies between planets and stars), the creation of “force-fields” to drive space ships, and propulsion without reaction. The last of these would permit a man to lift himself by his bootstraps. Anyone who wishes is free to accept such magic properties, but I cannot.

Despite this and many other scientific denouncements of the UFO, efforts to recreate its properties have been numerous. For decades, great scientific minds and research organizations have funnelled money and time into the holy grail of UFO technology — a round, hovering aircraft without moving parts or fuel. No major discoveries have, so far, resulted.

A little bit of research might have saved the effort. The whole concept of the flying saucer, as it turns out, was an accident — a clerical error. The flying saucer entered the public imagination thanks to a 1947 Chicago Sun article with the headline, “Supersonic Flying Saucers Sighted By Idaho Pilot.” The pilot, Kenneth Arnold, reported seeing nine shiny UFOs from his plane, traveling an estimated 1,200 miles per hour.

Here’s the thing, though. Arnold never described them as saucer-shaped. He said they flew erratically, “like a saucer if you skip it across the water.” Their shape was more like a boomerang or crescent. The headline-writer got it wrong, but it was too late to take it back. The news was all over the country, and all of a sudden people were spotting flying saucers all over the place.

Today most experts suspect Arnold had seen a flock of birds, and a trick of the eye made him overestimate their distance from him, and therefore their size and speed. But the idea of the flying saucer has stuck. Humankind will not rest until it builds the UFO of our fantasies.

More like this
Science
20 hours ago
The Large Hadron Collider restarts next week — here's what it's hunting for
By Rahul Rao
Science
6.26.2022 10:00 AM
In the search for dark matter, an unexpected tool may give scientists hope
By Antonis Antoniou and The Conversation
Science
6.16.2022 8:19 PM
Yellowstone flooding: 10 images capture the extent of destruction
By Jennifer Walter
Related Tags
Share: