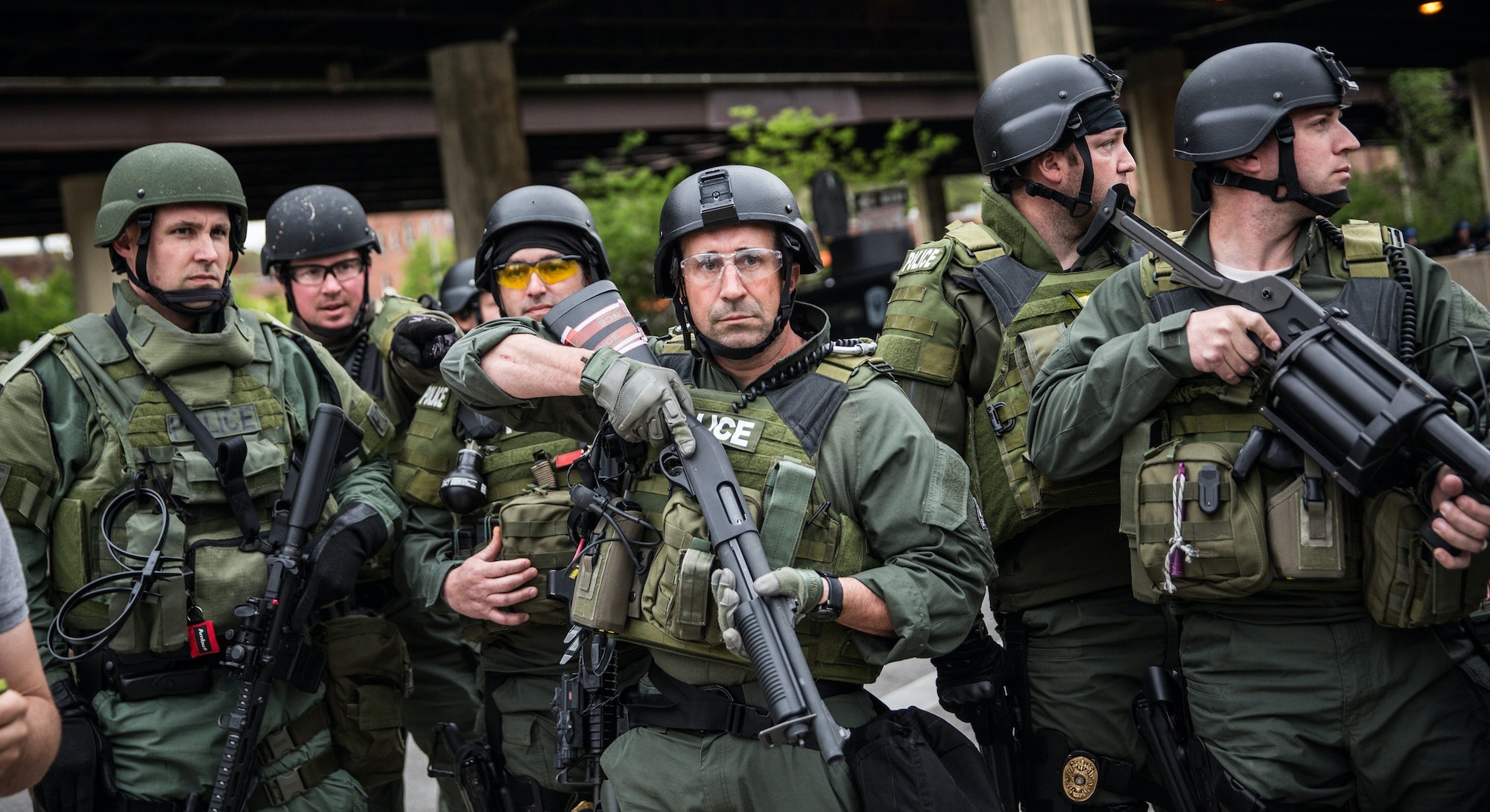 In July, Cleveland, Ohio will host the Republican National Convention. Donald Trump, leading in the polls and delegate count, has promised there will be “riots” if party elders try to block his nomination. Given what happened in Chicago – when a Trump rally was canceled in the face of large-scale protests, his statement shouldn’t be seen as an idle threat. Given that Cleveland’s majority is black and many Trump supports have evinced racist views, conflict seems likely.

The potential volatility of the RNC hasn’t been lost on Ohio law enforcement officials, who are stocking up on all sorts of new gear to both combat, and potentially escalate, any violence that might occur. Congress has allocated $50 million to spend on the event, since the RNC is designated as a national special security event. That money will go to paying for the costs of at least 5,000 officers who will be on duty, as well as 2,000 new riot control suits and 26-inch batons. The flood of funding and resources into Cleveland will do more than raise eyebrows.

Cleveland law enforcement has been under intense national scrutiny since the shooting of 12-year-old Tamir Rice. Rice’s killing came months after police killed Mike Brown in Ferguson, in 2014, which elevated the Movement for Black Lives – alternately referred to as Black Lives Matter – to the national stage. After Brown’s death, activists took to the streets to protest police violence and were met by cops that looked more like an invading army than local law enforcement. In response, President Barack Obama issued executive order 13688, which has resulted in the recall of some military vehicles and weapons.

Law enforcement has to comply with the order by April 1, but there are exceptions. Some departments will be allowed to keep combat vehicles they received from the Pentagon through its 1033 program. Many of those departments are in Ohio. In Boardman, for instance, cops will get to keep their MRAPs – mine-resistant ambush protected – vehicles, ostensibly for use in the event of a mass shooting. In other Ohio cities, Toledo, for instance, police have had to give back their armored vehicles.

Prior to Obama’s executive order, Ohio was a major recipient of retired DoD gear. Cops statewide got 5,000 M16 rifles, MRAPS, and other tactical equipment.

The RNC comes at a time in American politics that many see as the most volatile period since the 1960s. Trump’s open appeals to white supremacy harken back to George Wallace, and his strong authoritarian tendencies have drawn repeated and justified comparisons to Benito Mussolini and Adolf Hitler. There is currently a movement under way among gun rights supporters to allow open carry at the convention. This has been met with concern by those already perturbed by Trump’s support of violence. The frontrunner has offered to pay the legal bills of anyone arrested for assault at his rallies, and has suggested that protesters should be “roughed up.”

Following the attacks in Paris in November, Trump called for a ban to prohibit any Muslims who weren’t U.S. citizens from entering the states. And across the country, Arabs and Muslims are facing increasing rates of hate crimes that target them for their ethnicity or perceived religion.

Given police response to the Occupy movement in 2011 and the Black Lives Matter movement in 2014, it is entirely possible that the inter-agency force deployed in Cleveland will treat protesters as criminals and rioters by default. Even if some departments have been forced by the federal government to return their most war-like tools, the police will look like soldiers. Whether they will act like they’re at war remains to be seen, but given the political climate right now we could see images reminiscent of Ferguson or Oakland during the Occupy crackdown.