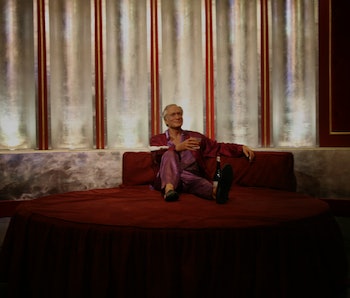 Playboy is for sale. So is the Playboy Mansion.

The formerly risqué magazine, which has been struggling since smut made it online, went non-nude this year. The decision was designed to make it appeal to a younger, less misogynistic readership, despite the fact that the company might best be described as “devalued.” Since the internet became the main medium for content distribution, Playboy has gone from being in the publishing industry to being in the brand licensing business, making money by attaching its iconic name and bunny logo to other products. The Wall Street Journal pegs the company’s potential sale price at “north of $500 million.”

How did the ultimate male fantasy (paradoxically) die online? The answer is complicated, touching on issues around pornography and advertising, but a 1999 lawsuit Playboy brought against internet technology companies Netscape and Excite provides a window into the mansion and the struggles of the luddites inside. The suit contended that the search engine companies were diluting the Playboy brand by selling the “playboy” and “playmate” search keywords to other companies. They were and the court determined that by showing other companies’ paid, non-Playboy ads alongside searches for “playboy” and “playmate,” Netscape and Excite technology was guilty of trademark dilution. But the ruling was the ultimate pyrrhic victory. Trying to shape and govern online associations in order make sure a brand remains cohesive online is no easy task.

When that brand is sexual in nature, well, good luck with that.

The subtext of the court decision is that the only reason anyone would type those words into a search engine is because that person wanted to see Playboy-related content. That’s a reach. And, by the time Playboy got online in a real way, people had already found other exciting ways of looking at naked women.

The company did eventually go all in on the internet — in ways that now appear faintly comical, but made sense at the time. In 2000, it partnered with Lycos to grant Lycos users access to a special Playboy-branded search homepage.

The longstanding joke about Playboy, “I read it for the articles,” anticipated the company’s problems online. ���People did read Playboy for the articles, many of which were excellent, but that’s not why they sought Playboy out in the first place. The complete brand, an amalgam of lust and intellectual curiosity, was perfect for newsstand sales and crummy for search engines. The internet gives us what we think we want — and that generally isn’t subtlety. This is why Playboy spent a few years investing heavily in pornography.

This is whey Playboy’s future doesn’t look like its past.