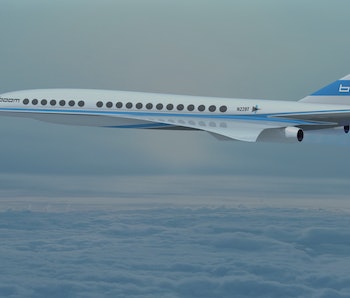 Richard Branson, founder of Virgin Group, announced his company’s investment in the research and development phase of a commercial supersonic jet that would be able to travel twice the speed of sound and transport up to 40 passengers from New York City to London — now a seven-hour journey — in a mere three-and-a-half hours.

The aircraft is being developed by the Denver-based aerospace start-up Boom and Branson’s own The Spaceship Company, and he says it will offer engineering and design assistance as well as flight testing, and operations. In return, Virgin will have the option to buy the first-purchase jets from the company.

Renderings of the craft — now’s as good a time as any to note there isn’t even a prototype yet — show off a slick air vessel that will be able to fly at Mach 2.2, or 1,451 miles per hour. At those speeds it will travel 2.6 times faster and 20,000 feet higher in altitude than any other commercial plane.

But the company still has a long way to go. And there’s somewhat of a cost barrier, too, as flights are estimated to cost around $5,000 for a round-trip. A drop in the bucket for the 1 percent but it won’t move many from Economy Class.

Boom founder Blake Scholl says that’ll be a reasonable price to pay if you’re a business executive who needs to leave New York at 6 a.m., make a London meeting by 2:30 p.m., leave that evening at 9 p.m. local time, and make it back to the U.S. in time to tuck your kids into bed.

With all that in mind, here are big five questions that need to be answered before the first tickets are sold.

If the company can stay true to that price point, there would surely be a number of people interested in reconnecting with family members overseas more quickly, or the aforementioned business travelers, or even the ultra wealthy on holiday.

However, it’s yet to be seen if middle class consumers would be interested in such an endeavor. Sure, you could fly out for a day and be back to tuck your kids in as Scholl says, but for $5,000, the average consumer is going to want to make a trip of it. Those dreamy scenarios of London-and-back day-trips don’t factor in long waits to get through Customs. There’s no such thing as supersonic speed when it comes to border agents.

For deals that need to be made in person, this would help — but for everything else, it’s hard to argue against HD-quality Skype or Google Hangout sessions.

A supersonic airplane for commercial flight has already been attempted once before, and it didn’t end well: yes, the Concorde offered flights at $20,000 a seat and ultimately lost the public’s trust when it crashed in a dramatically fiery scene on take off from Paris to New York on July 25, 2000. The crash killed all 113 people aboard and four more on the ground when it crashed into a hotel. It will be hard for some to shake off questions about safety.

3. How Much Will the Plane Cost?

Scholl still needs to collect a lot more investment funds. He says he’s only attracted $2 million so far and the majority of that has been from Silicon Valley billionaires. In comparison a Boeing 747, one of the most popular aircrafts, costs more than $250 million with varying costs among models. That price is also after the costly phase of research and development.

Boom will need a lot more if they’re going to accomplish their goal of being “able to get anywhere in the world in five hours for $100.” But Scholl also estimates supersonic travel is a $100 billion market, so the investment could be worth it.

But be weary of projection figures: the Concorde would wind up exceeding its original projected cost by more than six times.

4. When Is a Prototype Coming?

It looks like it might be a while yet given the state of Scholl’s bank, but he also just has a lot of materials and aerodynamics to research first.

Development of the Concorde began as early as 1950 with various studies and research. It would take that project 15 years to even begin development on a prototype, and the first test flight wouldn’t even take off until 1969.

Thankfully, Boom has decades of research into super sonic jets to build off, not just from Concorde, but also models from Boeing and Lockheed Martin that were actually able to develop more cost effective crafts while Concorde stumbled.

These crafts need to be light enough to swiftly glide through the air, but they also need to be sturdy enough not to break apart. Green fuel technologies are a growing concern for many aviation companies and the noise pollution produced by breaking the sound barrier makes it so these crafts can only make oceanic flights.

If the research and development phase can produce solutions to these questions, then Boom might have a winning piece of tech on their hands.