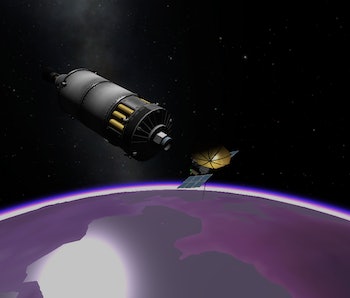 Elon Musk and Richard Branson have both promised to send thousands of satellites into low-Earth orbit, providing fast and reliable internet to every point on the planet. It’s a wonderful dream, and maybe a bit of a stretch, but definitely an orbital land rush. In the past, the sudden flow of capital into frontiers has almost inevitably resulted in conflict. But could this commercial space race lead to a private space war?

While there’s no reason to believe that either Musk or Branson would suddenly turn violent, it’s not hard to imagine how they might weaponize their vehicles. Considering the weaponization of space has long been a hobby for American and Russian defense agencies, and lord knows there’s enough documentation of that to start a lively discussion. There’s also this: Space is not a country and (Thanos aside) has no sovereign. What’s to stop SpaceX from mounting a laser attack on Virgin Galactic or sending a boarding party toward a Blue Origin vessel?

The answer, as it turns out, is both simple and uninspiring: the United Nations. The laws that govern space are pretty basic but not so immature that world leaders haven’t considered the potential for an international conflict.

The UN’s Treaty on Principles Governing the Activities of States in the Exploration and Use of Outer Space, including the Moon and Other Celestial Bodies, which entered into force all the way back in 1967, prohibits the weaponization of space pretty much full-stop. It’s actually an amazing artifact of international diplomacy, reflecting both Cold War anxieties and the optimism of the early years of space exploration.

“States Parties to the Treaty shall regard astronauts as envoys of mankind in outer space and shall render to them all possible assistance in the event of accident, distress, or emergency landing on the territory of another State Party or on the high seas. When astronauts make such a landing, they shall be safely and promptly returned to the State of registry of their space vehicle.”

“The exploration and use of outer space, including the Moon and other celestial bodies, shall be carried out for the benefit and in the interests of all countries, irrespective of their degree of economic or scientific development, and shall be the province of all mankind.”

This means that turning the moon into a Death Star is out for America, but not for Bezos. But wait — although it would have been difficult to predict commercial space exploration back in the ‘60s, it seems the diplomats of that era were ahead of their time.

Basically, the U.S. government is responsible for keeping SpaceX in line, and the UK must regulate Virgin. But let’s say they don’t, and Musk and Branson start a little outer space arms race. Their respective governments would be in violation of the treaty, but what laws would they be breaking?

The International Criminal Court, which can prosecute individuals and organizations for crimes outside of national jurisdiction, doesn’t have any history of tackling space crime, a burgeoning field. The space criminals would therefore be persecuted for their behavior on the ground. An international incident would like to be dealt with at the national level, which is especially interesting when you consider the amount of leeway international law gives individual countries. The U.N. Treaty does not put an adequate amount of language next to “benefit and in the interests of all countries” to rule out any country making any rule. To that end, space-bound corporations will need to do lobbying at the national level, which means they’ll be able to play countries off each other in pursuit of looser regulations or tax incentives or land grants. And the people who run space-bound companies should be careful about where they go on the ground if they fear prosecution.

There aren’t enough legal precedents to say for sure what would happen if a corporate conflict triggered a space war, but it’s fairly safe to say that consequences would be swift and severe. It’s also fair to say that the real conflict will almost certainly take place on Earth and about tawdry things like money and influence. Space War is inevitable in the sense that a second space age is inevitable and war is inevitable. But corporations aren’t strong enough to go rogue in orbit.

Well, the ones up there right now aren’t anyway.

More like this
Entertainment
8.6.2022 12:00 PM
The real stars of Bullet Train deserved better
By Eric Francisco
Culture
8.10.2022 11:30 AM
10 years ago, Jeremy Renner ruined the best spy-thriller franchise of the century
By Adrian Manuel
Culture
8.9.2022 10:00 AM
The Sandman: 11 characters pulled from DC comics history
By Robin Bea
Share: