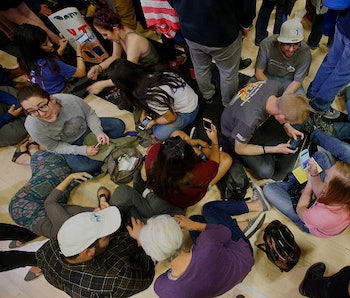 Global mobile data traffic grew by 74 percent in 2015, and more than half a billion devices and connections were added to the overwhelmingly clogged spectrum, according to recent Cisco reports. Analysts expect that the monthly global mobile traffic rates will reach 30.6 exabytes by 2020 (rates are at 3.7 exabytes per month as of 2015). The congestion slows connections for everyone from military personnel to laptop gamers. The radio, TV broadcast, and wifi pieces of the spectrum are cut in thinner and thinner slices. The question here is whether or not those slices can be both had and eaten.

“DARPA Challenges have traditionally rewarded teams that dominate their competitors, but when it comes to making the most of the electromagnetic spectrum, the team that shares most intelligently is going to win,” said SC2 program manager Paul Tilghman of DARPA’s Microsystems Technology Office (MTO) in today’s release. “We want to radically accelerate the development of machine-learning technologies and strategies that will allow on-the-fly sharing of spectrum at machine timescales.”

DARPA will be rewarding the research team with the best system. How will it determine the winner? Well, by having a huge gladiator-style throw down between telecommunication aficionados. To host the challenge, DARPA is going to build a massive wireless testbed, appropriately named the “Colosseum,” which will allow researchers to remotely conduct large-scale experiments that mimic realistic radio frequency environments, like a bustling city or a raging battle field.

The competition will take place over the course of three years starting in 2017 and finishing in 2020 with a live competition of the “finalists who have survived.” DARPA will make a formal recruitment announcement in the coming months.