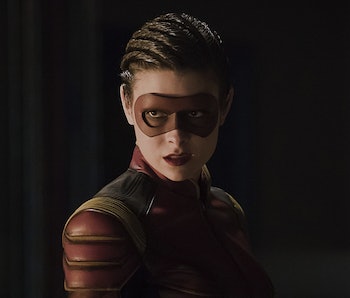 Luckily, pop culture conversations about drugs are more nuanced than they were 20 years ago, when America was still at the height of its War on Drugs. Back then TV’s teachable moments about substance abuse included laughable scenes like Jesse Spano’s breakdown on Saved by the Bell and superheroes leading announcements for the D.A.R.E. program. This week on The Flash, a modern series that viscerally recalls after-school cartoons — but is infinitely more emotionally fulfilling — the speed-addicted villain Trajectory (Allison Paige) meets a graphic demise that feels steeped in antiquated Reagan-era morals but is more subtle than simply “Winners Don’t Do Drugs.”

Following Jay’s (Teddy Sears) murder at the hands of Zoom (Teddy Sears, again), the new speedster Trajectory makes a mess of Central City. Trajectory is Eliza, a friend of Caitlin’s (Danielle Panabaker) at a rival lab who developed an addiction to Velocity-9, Caitlin’s speed steroid formulated to restore Jay’s Speed Force during his time on Earth-1. Eliza’s last fix pushes her so fast her that her body disintegrates violently into blue lightning, leading S.T.A.R. Labs to learn Zoom is Jay Garrick (so they think, for now) which throws everyone a devastating curveball.

There’s not a lot to Trajectory in comics, who appeared for a handful of issues in 2008 as a speedster for Lex Luthor until she was stripped her of her powers and killed by Blockbuster. She doesn’t matter in the grand scheme. Trajectory is, simply, plot. The real story is Barry (Grant Gustin) pushing himself to beat Zoom and comes within inches of using Velocity-9. Barry doesn’t break down singing “I’m So Excited,” he just has some real talk with Harrison Wells (Tom Cavanagh).

On the surface, these themes look as basic as F.B.I. messages on Mortal Kombat cabinets. But on a deeper level, The Flash is more like an ESPN documentary turned-superhero episode. The punch of “Trajectory” isn’t Eliza’s Velocity-9 addiction, but Barry’s willingness to “cheat” to best Zoom. But now, besting Zoom means killing a friend, a rock and a hard place that will lead anyone to run away screaming.