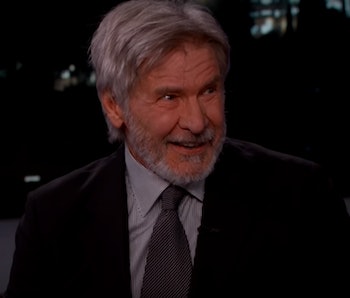 Now more than ever, Hollywood suffers from ageism — as well as a reboot fetish for films that often don’t need one. So weirdly, while it may seem like a Hollywood cash-in, there’s reason to celebrate that, once again, Harrison Ford will be donning his iconic fedora hat and whip in the fifth Indiana Jones film franchise.

Ford is 73 years old and will be 77 when the film is released on July 19, 2019. But while the franchise technically belongs to the action hero genre, Indy’s fans don’t watch his films expecting to see shit blown up, crazy CGI effects, or credible martial arts-inspired fight scenes. Emphatically, Ford as Indiana Jones is not a Marvel superhero — although Ford did recently prove himself to be no slouch in the latest Star Wars movie, in which he successfully reprised his role as Han Solo. With that in mind, there’s no reason why he can’t get back into the khakis and dive into adventure once again.

Should Ford, like the aging Arnie, have to flex his pecs on-screen to prove his virility? I don’t think so. Ford has always played Dr. Jones as a charmingly grizzled, surly, old-man type, who prefers to use more of his smarts — and sarcastic wit — and less of his muscles to prevail. Plus, archeology and professorship really isn’t a young man’s game. When a winter-whiskered Sean Connery popped up as Harrison’s father and sidekick in Indiana Jones and the Last Crusade — admittedly, my favorite Indie film — no one complained. And Connery, as Dr. Jones senior, still turned out to be pretty handy, if not slyly sexy.

Besides, although Ford was significantly younger when he first appeared in Indiana Jones and the Temple of Doom, by the time the film was released, he was already 42 years old — a casting decision that seems almost impossible today. Back then, the lead male roles you saw on-screen weren’t yet slanted towards skinny lads, or eternally cherub-faced androgynes — like, say, Zac Efron. Even though, thankfully, our modern-day definition of masculinity is much more flexible, I have to admit that as a die-hard Indy fan, it would still be annoying to suddenly see someone significantly younger — and trendier — in Ford’s role. In my view, Ford is so deeply identified with Indie Jones that it’s hard to imagine anyone else filling his character’s well-worn boots.

As for Ford himself, he’s expressed that he’s totally up to the task. On the Jimmy Kimmel show last night, Ford said that he was “excited” about playing Dr. Jones again, and “looking forward” to the chance of teaming up once more with Steven Spielberg. And I’m excited too, since the powerhouse trifecta of Ford rematched with multi-Oscar winner Spielberg (who directed all of the previous Dr. Jones films) and Kathleen Kennedy (who produced them, as well as the Star Wars films) is Hollywood history in the making. So we viewers are the lucky ones, to have a cinema titan like Ford still around — and very much kicking — much less to still be able to enjoy his work.

Let’s also not forget that Ford’s age, like a fine wine, is a plus for the pleasure of performance. He’s still an incredibly talented actor whose diverse career spans over four decades. Ford gave shape and dimension to Hans Solo and Indie Jones, but equally, he also gave us the unforgettable Rick Deckard in Blade Runner and John Book in Witness. And if money any kind of indicator for commercial success, well, we’d be remiss to forget that Ford’s audience appeal — with worldwide grosses surpassing $6 billion — make him the highest-grossing U.S. domestic box-office star. Boom. Not bad for an old man.

More like this
Entertainment
5.3.2022 12:00 PM
How the "Mother of Yoda" conquered Hollywood — and why she disappeared
By Falene Nurse
Entertainment
6 hours ago
29 years ago, Marvel unleashed Spider-Man’s scariest enemy ever
By Richard Newby
Entertainment
5.14.2022 10:31 AM
Obi-Wan Kenobi could bring back an iconic Star Wars character
By Dais Johnston
Related Tags
Share: