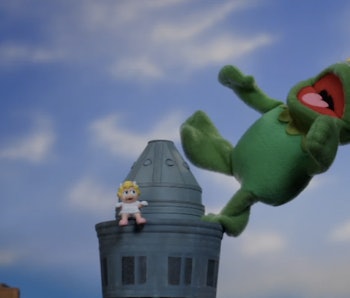 Remember last week, when we said it was refreshing to watch a sketch show like Robot Chicken, whose entire purpose was simply to deliver pop culture puns? Well, here’s a necessary caveat: the puns have to feel unexpected. In last night’s episode, Robot Chicken delivered two funny pun-based sketches, and twelve really lame ones.

The viewer doesn’t get any extra pleasure out of watching the following wordplay-sketches happen, so a list will suffice:

Now that those are out of the way, the episode featured a couple bits worth remembering. Robot Chicken’s best material is its Star Wars spoofs, so it was exciting to see the series address an issue from The Force Awakens, however briefly. In a sketch mid-way through the episode, the scene in which Obi Wan defeats Anakin near a lava river played out — only in this version, Obi Wan said the words “high ground” after each line. He also stole Anakin’s lightsaber and resolved to give it to his son. As Star Wars fans know, The Force Awakens introduced a plot-hole, in which Luke’s lightsaber mysteriously ends up in a basement below a cantina. This bit from Robot Chicken felt stale, but if the show addresses TFA in the next couple episodes, it will benefit from all the new material.

In another misused and timely reference, Robot Chicken staged a fight between the Power Rangers and a giant moss monster. Instead of talking about the upcoming Power Rangers reboot, the show had two elderly characters enter the moss monster’s butthole and accidentally ignite a methane pocket, killing themselves and the monster. That’s it. Then we got that old couple’s funeral, and their daughter trying to explain what happened to another mourner. It’s acceptable that Robot Chicken’s use of fictional characters is supposed to be madcap and dumb, but not using a franchise’s low-hanging fruit — ethnic diversity, perpetually teenage heroes, bad acting — just seems lazy.

As for the best bit, well, Robot Chicken is at its best when it crams multiple dumb reveals into one very short sketch. Its funniest sketch last night began with two businessmen arguing over which midwestern states they’d each represent during the year’s schedule of insurance conventions. One man pouted, demanding to know why he couldn’t work in Northeast Minnesota. The other man asked, “You want Duluth? You can’t handle Duluth!”, and both men were given a standing ovation by the audience at the Insurance Executives Talent Show. Sometimes, it’s the simple things that keep us going. In honor of National Poetry Day, Inverse would like to commend Robot Chicken on last night’s Duluth sketch, which was truly an example of contemporary poetry.