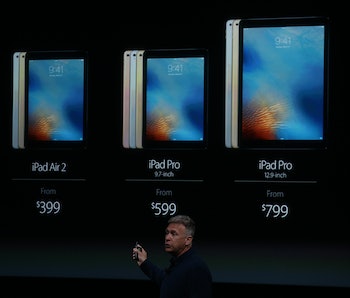 Apple unveiled another iPad to the iPad Pro family, and it’s a lot like the first generation but with some shiny new features. The company claims the smaller generation is another step toward the future of personal computing. The 9.7-inch iPad Pro may seem like a scaled-down version of the 12-inch iPad Pro, but it’s able to support some significant new features, including the much raved-about True Tone display and Night Shift feature.

Six years ago, Steve Jobs held up the very first iPad — a 9.7-inch model that weighed 1.5 pounds. During the release he had asked:

“Is there room for a third category of device in the middle, something that’s between a laptop and a smartphone? And we have of course we’ve pondered this question for years as well. That bar is pretty high.”

Apple believes the new 9.7-inch iPad Pro serves as the perfect alternative to laptops and smartphones. Tim Cook even said during the event that, “the [12-inch] iPad Pro has become the primary computing device.”

The 9.7-inch iPad Pro takes the processing power of the first iPad Pro and blends it with the success of the smaller-sized generation of iPads. Many prefer the 9.7-inch versions because they provide a large enough display to read, but are easy to carry. It remains Apple’s most popular iPad size, selling more than 200 million devices.

Apple is also marketing the iPad Pro to Windows users: Philip Schiller, senior vice president of Apple’s worldwide marketing said that there are more than 600 millions PCs in use today that are over five years old.

The most impressive updates to the iPad Pro are in the display. Schiller started off by saying how much customers have loved the iPad Pro over the 12 months it’s been on the market, rattling off a quote by customers, including this one by Pixar and Disney animator John Lasseter:

“The iPad Pro and the Apple pencil are the closest we’ve ever had to actually drawing on paper.”

The retina display is equipped with Oxide thin-film transistors, a custom timing controller, and photo alignment for individual screen crystals, that gives it 1.8 percent reflectivity — the lowest of any tablet. The display is also 25 percent brighter than the iPad Air 2 and has a 25 percent color saturation boost. It can also support the Night Shift feature, which adjusts the amount of blue light emitted from the screen as the sun goes down, making it easier to sleep.

Schiller was also excited to present the iPad Pro’s True Tone display capabilities, technology that enables the screen to respond and adjust to light. The technology measures color temperature of ambient light and matches it so that it looks like you are reading off paper. It’s the first Apple device to have such a function.

Mac fanatics have anticipated the release of this new iPad since February, and they can now preorder the 9.7-inch, less than one pound, iPad Pro on Thursday. The 9.7-inch iPad Pro will be sold at three different price points: $599 for 32 gigabytes, $749 for 128 gigabytes, and the first ever 256 gigabyte iPad for $899.

The latest iPad was debuted alongside the 4-inch iPhone 5SE and Apple tvOS at Apple’s special event held at the company’s Cupertino headquarters. Today’s product launch comes just a day before Apple returns to the federal court to receive an opinion from Judge Sheri Pym on the San Bernardino iPhone 5C case.

More like this
Gear
Jan. 19, 2023
Why Apple's rumored smart display could be doomed from the start
By James Pero
Gear
Jan. 18, 2023
Apple’s new HomePod improves on the original in every way
By Raymond Wong
Innovation
Jan. 28, 2023
The 5 best mini projectors for iPhones
By Debbie Lee
LEARN SOMETHING NEW EVERY DAY.
Related Tags
Share: