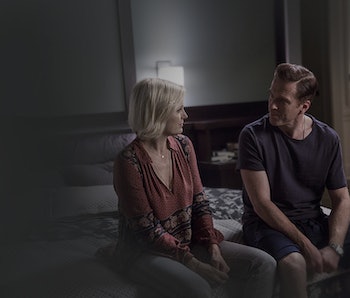 This week’s Billions episode seems like it should be the penultimate installment in a 10-episode series; it’s just that tense, from start to finish. Instead, “Where the Fuck is Donnie?” is just the scrimmage before what we can only expect to be a savage, three-hour battle between the D.A.’s office and Axe Capital. Or, at least, between Axe and Chuck, if everyone else renounces the two of them and their dirty tactics.

After Axe’s (Damian Lewis) morally bankrupt trades on aviation stocks during 9/11 are made public knowledge — and Axe’s double-agent Donnie throws both Connerty (Toby Leonard Moore) and his boss for a loop by running away to a Buddhist hotel convention — chaos reigns. Lara (Malin Ackerman) is on the verge of divorcing Axe, and even if she resists the pressure from her family (remember, her fire-fighter brother died in the Twin Towers), her restaurant and the family farm have both been destroyed as a result of his scandal. There is no way Axe’s empire can recover, but he still may be able to get out alive; “how” remains to be seen.

Meanwhile, Chuck (Paul Giamatti) accelerates to an open war with Wendy (Maggie Siff) after it becomes clear he hasn’t actually stopped horning in on Connerty’s investigation. Even after their office finally nabs Donnie (David Cromer) — with full departmental resources on their side now that Axe is an object of city-wide ire — they realize they are dealing with forces beyond their control when he spits blood up and collapses in the final moments of the episode.

Billions has become more compelling as Axe has inched closer to becoming a full-on renegade figure, and has lost his vast system of support. The best moment of the episode finds him making a last-ditch attempt to win back over the support of the firefighters union, to whom he’s donated hundreds of millions of dollars. When arguing that he traded on 9/11 in an pre-emptive attempt to give back to the families of his deceased co-workers, he seems to hold the room’s attention.

It’s one of those moments when Axe seems truly heartfelt, and his remorse and vulnerability is palpable. Because we as an audience are almost taken in by his explanation, we believe the fire fighters must also be. In the next scene, though, the union reps run Lara’s crops into the ground. None of Axe’s charm, humility and strong-arming can make up for this skeleton in his closet; it’s one of the most effective and unexpected dramatic turns of the episode.

At this point, Billions has done an exemplary job with making us engage deeply with almost all of its plot threads. Some of Chuck’s legalese — here, the backroom dealings in court — fall a bit flat, but showrunners Koppelman, Levien and Sorkin lace these scenes with inflated, bro-Shakespearean one-liners to hold our interest. The best ones this week? “Now that I have El Dorado in my sights you want to sack the city with me?” or “You’re apologizing because the lion next down ate our schnauzer.”

Axe remains good at them himself:

In committing to its extroverted, grandiose, David Mamet-like melodrama to the fullest, Billions has won us over, and the downward spiral we’re about to witness will doubtless be one of the most compelling dramatic sprints on TV this season.