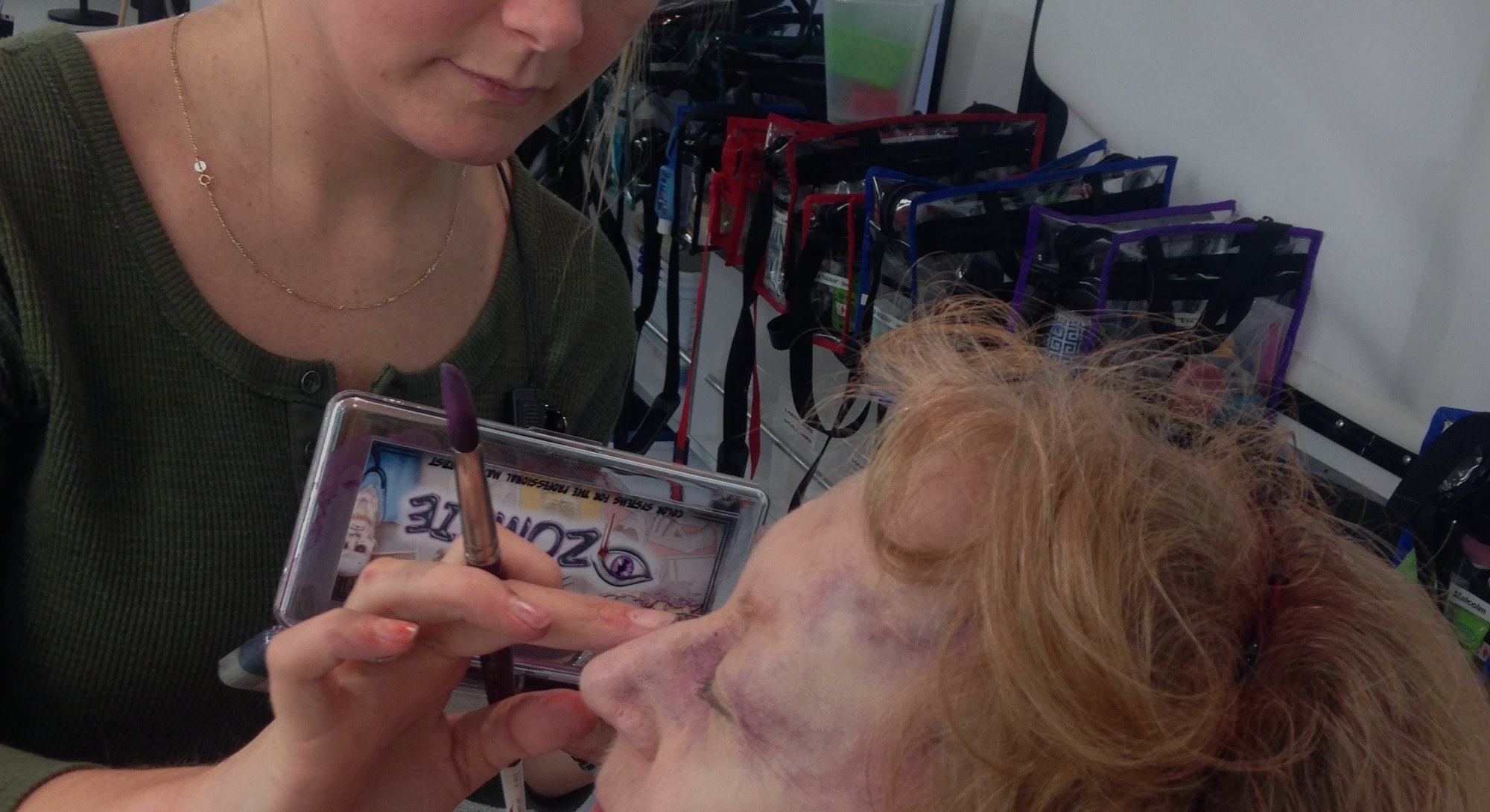 Make-up artist Amber Trudeau has made actors look purposefully terrible for a decade, working on series like The 100 and Arrow, and on many films sets, Twilight among them. As the lead make-up artist on The CW’s iZombie, Trudeau has innovated a new look for the show’s distinctive zombies. Her monsters go through several stages of decay and ferocity, depending on how long it’s been since they had brains, and whether or not they perceive a threat.

As a life-long zombie flick fan, I’ve been watching the plucky, witty and legitimately scary iZombie since the beginning, which made it extra exciting for me to pick Trudeau’s brain.

What was your background before you began work on iZombie? Have you always been interested in horror make-up?

My background has always been in film and television. After graduating makeup school, I volunteered on film sets in order to gain experience and absorb everything I could from every artist I met.

I have been so lucky to work in many different genres, which allowed me to do a variety of makeup styles. iZombie is one of those rare shows that gives me the opportunity to do it all, from beautiful “zombie” makeup to dead bodies in a morgue, on a regular basis.

Can you describe the process of designing Liv’s face when she goes full Romero? It’s a very unique look, and not typical of zombies I’ve seen in other media. I’d love to know how you developed it.

So, that look is actually called “full-on zombie mode”. It shows up specifically when Liv’s eyes go red. Her makeup becomes darker and her veins start to show.

Because Liv has embraced her inner zombie and does not choose to tan herself and cover her dark eyes, I have to make sure that when she goes “full-on zombie mode”, all these features are exaggerated.

I wanted to keep her beauty makeup colors and deepen them to a point where she is still recognizable as Liv, but much scarier. In order to pull that off, I just hollow out the eyes with deep maroons and purple tones, and then add in the veins. The red eyes make a huge difference. Rose does an amazing job with her acting, in order to embrace all the makeup as well.

Although we see a lot of this look built in practical makeup, “full on zombie mode” also is achieved with the help of our fantastic visual FX team. In some situations, we can’t cut and take the makeup on and off, so we use the visual FX approach.

What do you think makes an effectively scary makeup design? Do you draw inspiration from other work?

Creating a scary experience is really a team effort, involving the entire crew, from the creators and producers of your show, to your set design, props, director of photography and lighting crew, and your makeup assistants. Of course, the actor wearing your makeup design really highlights your work and turns into a scary character. I’m very lucky to work with one of the best cast and crews in Vancouver.

I will mention one tip: when designing any sort of scary makeup, please don’t cover it all in blood. Sometimes, you see this beautiful sculpting and prosthetic work and it’s just jammed wth blood, and the artist loses all that hard wok. Remember that small details, in horror, need to be highlighted and not hidden.

I draw my inspiration from so many different artists. Rick Baker (known for his creature effects, Men in Black), Tami Lane (known for prosthetics, the Narnia films), Howard Berger (Narnia, The Walking Dead), Bill Corso (monster effects), Bill Terezakis (The X-Files, Planet of the Apes) and of course the Stan Winston School, which is filled with the most talented artists. We are so lucky, that this day in age we have the internet and the opportunity to search and find the best design inspiration from all over the world.

I’m also inspired by pictures of real people. When we first started iZombie, there was this small group of us, and we were fortunate enough to visit a real morgue and see the tools and procedures used to for an actual autopsy.

We didn’t see an autopsy performed, but we didn’t have to. Our morgue tech was more than helpful, answering all of our questions and specifically going through the whole process, step by step.

But the most interesting part of that experience was seeing a real dead body up close. Because I design, craft and apply all the Y incisions for our dead bodies and victims on the show, I wanted to make sure it was as accurate and real as possible. That was such an amazing experience, and an image that I will never forget. I feel my team of amazing artists and I have achieved that image for viewers to see on iZombie. We all get so excited when we have morgue days, which isn’t something you’d typically say out-loud… (laughs)

Can you walk me through a typical day on set?

We start with our talented cast stepping up into the trailer. Robert Buckley (Major) gives the best morning hugs, Rahul (Ravi) is always sporting the best Star Wars sweaters, Rose (Liz) with a big smile, and then Malcolm (Clive) always heads straight for the candy. (laughs) I have a little candy station that ends up being Malcolm Goodwin’s breakfast, most of the time.

We banter and laugh through the makeup process, and David Anders (Blaine) always supplies the best music. We head to a blocking, which the entire crew is involved in, with a good vibe on set. I’m always behind the monitor with our amazing director of photography, Micheal Wale.

We really work together as a team to make sure the cast is looking their very best. It’s an especially good day when he pranks the cast with his infamous fart machine. (laughs) He gets them every time!

Throughout the day, our scenes are led by various directors. Rain or shine, our crew works so hard to facilitate our day. My fantastic makeup team of artists, Malin Sjostrom and Cory Roberts, and I are touching up actors, spraying blood and chasing zombies around. At the end of the day, the cast comes in for a hot towel and clean up. They each have there own regime, and we chat about the day and clean-up to some tunes, and go through what the next day holds for us.

Over all, as I said, we have the best cast and crew in the world, and it’s like one big happy family. So, a typical day on set is like spending the entire day with your best friends.

That’s fantastic! I know you do a ton of zombies, but getting to design “Old Man Anders” this season was probably a unique experience. Has iZombie given you a lot specific challenges like that?

Yes, absolutely! “Old Man Anders” was such a great makeup look to design. It was so much fun to do with David Anders, specifically. He made a cute old man and really embraced the makeup.

In “Abracadavor���, I had to make a character into a beautiful woman then into a believable man as well. That included a lot of texturing to the face, a mustache, a small chin hair piece, even the eye-brows. That was huge challenge. The small detail of just changing her nails really brought it together.

We have had frozen looks on Major and the other zombies from season one. I’ve also had the opportunity to design Romero zombies and all our zombies from Zombie High (the show within the show). Not to mention, all the dead bodies on the show that I get to design, communicating the backstory of how they died. So, needless to say, iZombie definitely give me unique challenges and I love it!

Do you have any tips for cosplayers looking to make themselves into iZombie-style zombies?

You can actually buy a Amber Trudeau iZombie illustrator palette from Premier Products. It’s an alcohol based makeup palette that has all the makeup colors used for zombies and all the dead bodies on set. It’s a staple to have, if you’re an iZombie makeup fan.

As far as Liv’s makeup goes, one of the most important tips I can give out is to pale out your own skin tone and give yourself a glow using a illuminating primer. Like I said, I use purples and deep maroons to do her eye makeup and blend those colors into her pale complexion.

Then, I use lots of mascara! It’s all about appearing like your natural color is this washed out look, and not making yourself look like you’re wearing Halloween makeup. I’m always impressed with how good everyone looks at cosplaying events. It’s really exciting to see.