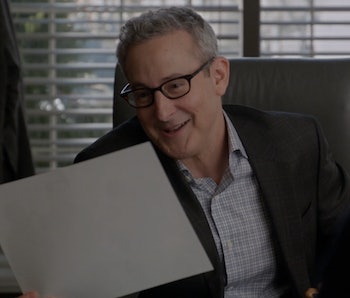 Last night, iZombie returned to form after a couple meandering episodes, overlapping its several storylines and ramping up the stakes. It also relied too heavily on Mr. Boss, who isn’t formidable or funny, while the other series antagonists, Blaine and Vaughn, are both.

As Vulture pointed out, this week’s episode was originally intended to be the penultimate episode of the show’s second season. The CW ordered more iZombie episodes after it was written, so we’ll have to see how well the additional material feels once it’s been tacked on. It’s a relief knowing this, as “Physician, Heal Thy Selfie” wasn’t anywhere near as exciting as the first season’s final episodes.

Though the body count was high, no one the audience cares about was in physical danger. Threatening background characters like Liv’s brother who needed her blood and then promptly disappeared from the show doesn’t do much. In order to really hit us where it hurts, we need to fear for Liv, Ravi, Clive, Blaine, Peyton, or Major. (Those names are listed in order of importance, by the way.) Everybody else is just mincemeat.

Hopefully, iZombie will adjust its priorities as the show approaches its season finale. For instance, Mr. Boss disappearing and reappearing undercuts his supposed power. This week, he threatened Blaine in a scene that served to illustrate only the difference between an actor with a great, unique mode of line delivery and a guy we’re supposed to think is scary, despite his weird lisp. Granted, I’m a Blaine stan, but the guy deserves to go head-to-head with characters who can match his vigor. Every exchange he has with Liv works, and his fight scene with Ravi felt exciting.

There are, however, a few fantastic and risky stories bubbling to the surface. Clive and his partner are very close to figuring out how Blaine relates to the Chaos Killer, and Major is going to have to admit being a serial killer to either Liv or Ravi before Vaughn takes him out like he somehow did to that poor guy in Bangkok. (Sidenote: damn it, Vaughn, you pronounce Sauron SAW-ron, not SORE-on. Tolkien laid this out clearly in his pronunciation guide in The Children of Húrin.)

As Ravi pointed out in the episode’s final scenes, Peyton is now in danger for trying to nab and prosecute Mr. Boss, which means Blaine will likely factor in, as her ex-lover and now subordinate to Boss. Will Blaine have to kill Peyton? Will he kill her and zombify her in a moment of anguish? The virus, of course, remains an undercurrent threat to the show’s characters, although Ravi put his investigations aside after determining that his cure was only temporary.

While the show drags because of its insistence on making Mr. Boss its primary antagonist, the highlight is still Liv and Ravi’s repartee. As long as that friendship, and Liv’s murder-of-the-week job at the morgue continues, the show will keep on shambling forward.