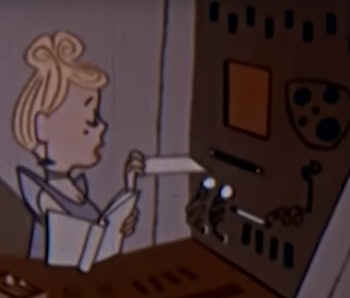 In 1956, the Automobile Manufactures Association paid John Sutherland, the voice of Bambi and the creator of Thumper, to make a car safety film entitled Your Safety First. The idea of the production was that it would envision a day in the life of an Average Joe in the year 2000 (October 5, 2000 to be exact). What Sutherland, who had previously made an anti-Communism short for Harding College, came up with was pure propaganda. It was also weirdly prescient.

The cartoon overshot the space travel thing and the 4-hour work week thing, which presaged a recurring joke on the Jetsons. But it did predict that we’d all want to travel in vacuum tubes, something Elon Musk is working on with the hyperloop, and that the aged would stubbornly remain behind the wheel. But that isn’t the amazing stuff. The amazing stuff is political.

Notice on the front page of the newspaper how it talks about tax cuts, and alludes to terrorism. Considering where the world actually was in the year 2000, that’s scary accurate. Sure, Sutherland predicted self-driving cars, which if Google has its way will almost certainly roll out commercially this decade, but it’s way more important that Sutherland guessed what would frighten us.

To understand how Sutherland knew what he knew, it’s helpful to know who he was. Sutherland was a veteran of the propaganda war against the Nazis, having made animated shorts for the government during WWII. He was also one of the animators that emerged from Disney and went corporate. He did a lot of work for major corporations, including General Motors. And when he wasn’t doing that work he cashed checks from major corporations advocating against welfare plans, like Truman’s Brannan Act, aimed to help small businesses fight rising conglomerates. He was white and straight and probably a lovely person, but also a person that operated almost exclusively from a place of cultural comfort.

Did Sutherland know that income inequality and terrorism would be critical issues? No, but as a member of the creative, well-fed elite, he knew what it was to be culturally comfortable. He knew what it meant to stand one’s ground against the forces of the disenfranchised. His policies weren’t modern, but his politics really were. Was he a proto-Trumpian? Unlikely. A lot of his work came from a place of emotional wisdom. But he wasn’t a populist. His world view made his prediction inevitable.

It also worth noting that the actor doing the voice for the Future Joe is George O’Hanlon, who would later become the voice of George Jetson. However, unlike Future Joe, we can’t imagine George threatening to give Elroy a smack.