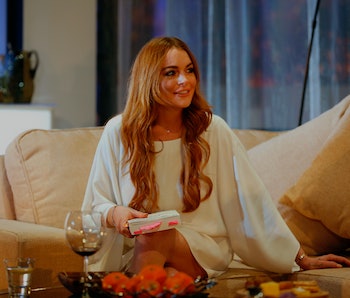 Lindsay Lohan is back in court, and this time, she’s not the defendant.

When Grand Theft Auto V came out last year, its cover art, marketing posters, and even the game disc itself featured Lacey Jonas, a bikini-clad, dirty-blond-haired woman posing coquettishly for a selfie on one of the L.A.-inspired region of Los Santos’ many beaches. Lindsay Lohan saw Lacey Jonas, and thought she looked a little too familiar.

Lohan filed a suit against Rockstar Entertainment and its owners Take Two Interactive Software, alleging that the Lacey Jonas character was modeled after Lohan’s image, pointing out the resemblance between the cover art and a picture taken of Lohan years before, as well as references to Mean Girls, and multiple other uses of her image. You can read the full complaint here, complete with comparisons of GTA V’s art and pictures of Lohan.

Take Two immediately tried to have the suit thrown out, citing Lohan’s prior unsuccessful lawsuits against Pitbull (for making fun of her in a lyric), and E-Trade (for a 2000 commercial including a “milkoholic” baby named Lindsay), as well as saying Lohan filed her complaint too late (publicity suits must be filed within a year of the offense). But on Friday, New York Supreme Court judge Joan Kennedy decided she wanted to hear more, and denied Take Two’s motion to dismiss the case.

It’s a big win for Lohan, who will get more time to build her case. In her decision (in full here), Kennedy said she couldn’t take for granted Take Two’s assertions that the images of Lacy Jonas in the game didn’t depict Lohan, as Lohan’s complaint vehemently disagreed with their defense.

Kennedy also waved off Take Two’s claim that Lohan filed her complaint too late. Take Two said that the images in question of Lohan were originally published on November 1, 2012, more than a year before the complaint was filed on July 1, 2014. But Lohan says the materials were re-published on September 17, 2013, when the game was officially released, making her complaint perfectly timely.

Take Two tried to make the case that the originally released promo images and the final product were one and the same, as their intended audience was the same, but Kennedy didn’t think that was enough.

GTA V has sold over 60 million copies worldwide, as of February. The game prides itself on it’s sense of realism and life in the world (despite the constant catastrophic car accidents). While Lohan’s case is still very much in the air, Judge Kennedy clearly thought there was enough merit (or at least more than zero merit) to Lohan’s complaint to keep it on her desk for a while longer.

Check out this video of one of the first “Lacey Jonas” missions in GTA V below: