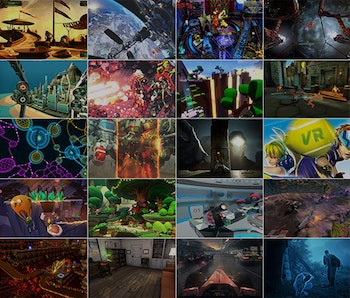 This morning, Oculus announced that 30 games will grace Rift on March 28th. We’ve seen these games before, but the announcement gives us better idea as to how Rift wants to introduce itself to new users. In short, it’s all very familiar.

Among the titles announced for the initial ship date of March 28th are EVE: Valkyrie, Lucky’s Tale and Chronos, all of which we’ve seen and heard about before. In fact, all of the games in the initial lineup are familiar, but that’s to be expected. Most of these games are have been publicized at length and are pretty anticipated by the early adopter community.

What’s more, though, is that these games both look familiar and look like something else, probably an essential element of early VR. It’s vital that players and early adopters know what to do — and have compelling things to do — once they put on the headset. While many of those early adopters will have tried VR before, the consumer-level movement is doomed to falter if players are met by confusing or unnatural mechanics.

Gaming in VR will likely get very good (and possibly very different) very fast. But first, users need to understand how gaming in VR looks and feels . That’s what these first 30 games are all about. They’ll introduce new tracking-based mechanics, but they’ll also feel very familiar to anyone who’s played games before.

Rift is poised to dramatically alter the way that we play games and consume content, but first, it has to make us feel comfortable. There are ground rules in VR just like there are on console and PC games, and these first 30 games will likely establish them.