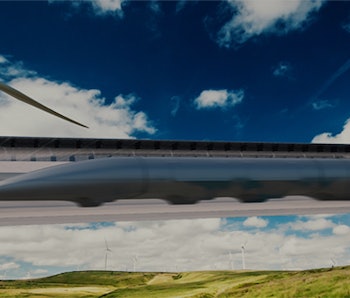 The race to send human beings rocketing through vacuum tubes at almost 800 miles per hour is accelerating. Bibop Gresta, COO and deputy chairman of Hyperloop Transportation Technologies, has claimed on CNBC that his company is currently constructing the first full-scale prototype track at their facility in Quay Valley, California. The news comes as HTT’s direct competitor, the similarly named Hyperloop Technologies, is building a test facility near Las Vegas, Nevada (tubes are already on the ground).

Elon Musk’s concept seems to be coming to market, but it can be hard to tell; some tubes and an announcement does not new infrastructure make.

Gresta says HTT is the “only company that is building a full-scale hyperloop,” positing that his competitors are only fashioning a test track facility. He also notes that HTT recently announced the first partnership with a national government to build a hyperloop system in the future. HTT says it has reached a deal with the government of Slovakia to connect the capital, Bratislava to either Vienna, Austria or Budapest, Hungary. When CNBC anchor Kelly Evans pressed him, saying that Hyperloop Tech is “getting it up to about 400 miles per hour,” Gresta cut in.

“Good, and we like competition,” he said, before griping that Hyperloop Tech chose such a similar name and assuring Evans that his company also had a test track.

Hyperloop is the brainchild of Elon Musk, who has been hosting a sort of technological Hunger Games as competing companies and student teams strive to make the next step in mass transportation a reality. HTT and Hyperloop Technologies are two of the frontrunners at the moment, but details about their actual progress is scant. HTT updated their blog for the first time in over a year on March 10, and Hyperloop Technologies hasn’t posted any news on tests since December. Other than the footage mentioned above, actual evidence of Hyperloop testing isn’t easy to find.

While both companies are clearly working toward something, televised interviews aren’t much to go on in terms of actual progress. You can watch Gresta’s full interview here](http://linkis.com/video.cnbc.com/galle/LHIxH) — and regardless, competition can only be good for consumers hoping that an eventual new mode of transportation is affordable.

More like this
Innovation
13 hours ago
Can cars run on water? The science of a TikTok conspiracy theory, explained
By Andrew Moseman
Innovation
6.27.2022 8:00 PM
Artificial photosynthesis can grow plants without light — and may solve a planetary dilemma
By Steph Lee
Innovation
6.25.2022 10:00 AM
9 veggies that are healthier cooked than raw
By Laura Brown and The Conversation
Related Tags
Share: