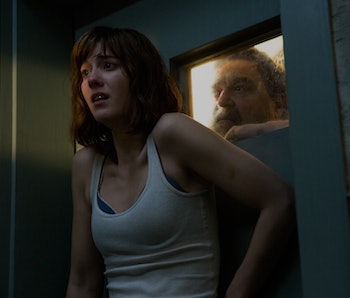 At some point during the making of Dan Trachtenberg’s tiny horror film Valencia, the movie got swallowed up by the Bad Robot machine (no pun intended) and became 10 Cloverfield Lane, a resuscitation of the Cloverfield brand that juxtaposed gigantic scale with small vision. But regardless of its beginnings, 10 Cloverfield Lane achieved the impossible in the modern studio era however accidental: the reshaping of the origin story genre.

Origin stories didn’t have to become terrible, but the colossal, paradigm-shifting success of Sam Raimi’s Spider-Man and Christopher Nolan’s Batman Begins and the overall reliability of franchises doomed studios to pursue virtually any character and explain their origins with inflated budgets. But no one cared how the Lone Ranger or John Carter earned their stripes, and yet Disney inexplicably reintroduced the Greatest Generation’s action figures to millennials who responded by not going to the movies that weekend.

The key to origin stories is simple: explain how characters — who we actually care about — got their start in a way we can’t guess the ending. Even then, that formula doesn’t grant origin movies immunity from being the cinematic equivalent of a garbage fire. (Ask any Marvel fan still sour about sitting through X-Men Origins: Wolverine, or hell, Star Wars fans and the prequels.)

It’s important to note that Cloverfield’s new protagonist, Michelle — played well by Mary Elizabeth Winstead — isn’t an established character. She isn’t Ripley from Alien(s), this movie is the very first time anyone is getting acquainted with her. Even after the film I doubt anybody will cosplay as Michelle at Comic-Con (unless you really want to, Reddit found her Eiffel Tower t-shirt). 10 Cloverfield Lane is simply about survival, not how a legendary heroine cut her teeth.

But maybe it can be. I suspect anyone who saw 10 Cloverfield Lane felt the same way I did about Michelle and her survival despite knowing little else about her, or who she will become: We cared.

We know enough that she’s independent, but throughout 10 Cloverfield Lane we see her become resourceful, cunning, and creative, with none of the annoyances that plague other final girls in horror movies. I felt tingles of a superhero origin when Michelle improvised her survival gear with Emmet, and the film’s ending where she’s zooming into Houston to push back against the invasion is like she’s barging into the third act of a totally different, much bigger action movie.

I want to be clear 10 Cloverfield Lane ultimately works because we won’t see what Michelle does in Houston. And we shouldn’t, because it’s far more satisfying to ponder than to actually see it played out. But the framework for interesting origin stories have been reshaped and rebooted by Trachtenberg’s directorial debut, which successfully made us care about a protagonist and we’re anxious to see what she does next, whether we actually know it or not.