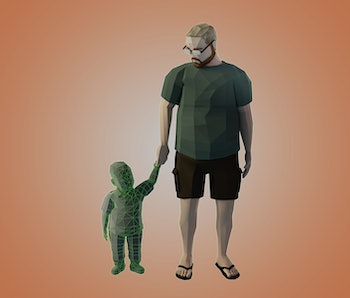 About a quarter into Thank You For Playing, a documentary about the creation of the controversial indie game That Dragon, Cancer, creator Ryan Green hosts game’s first demo at the annual PAX Prime convention in Seattle. Surrounded by lights, smiling publicists, and digital assault rifles on every flatscreen, Green secludes himself to a corner, takes off his glasses, and breaks down. It’s the first time he shows this kind of vulnerability on camera.

“It was the first time I got a sense how much Ryan was willing to let us into his world,” David Osit, one of the film’s directors told Inverse. “There’s a temptation of just letting people in that situation be alone in their pain. It was the first moment we got a sense we were in it together, a sense of us being allowed to document everything he was going through and that he was okay with that.”

Amidst pre-release buzz and heated debates about the game’s integrity, Thank You For Playing is a meditative making-of doc following the Green family while making That Dragon, Cancer, their interactive memoir about infant son Joel and his terminal illness. Directed by Malika Zouhali-Worrall (Call Me Kuchu) and David Osit, the film premiered at the 2015 Tribeca Film Festival and will release in New York on March 18 and On Demand on March 29.

On a recent phone call, I spoke with the directors about the challenge of making a film during the most tumultuous time for any one person to endure, let alone an entire family. (Warning: Mild spoilers are ahead.)

I imagine this film had a shortened or expedited pre-production because of Joel’s illness. How fast did Thank You For Playing go from idea to shooting?

David Osit: There wasn’t any shortened timeline. I read on Kill Screen just two sentences about That Dragon, Cancer early in development. Just reading that was interesting, the idea what video games could be and what the experience would be like making a game of this sort. We weren’t invested in the video game world, we certainly are now, but we didn’t know how that would manifest into art let alone into an experience playable by others.

We reached out to Ryan and [programmer] Josh [Larson] and Skyped with them, told them we were interested in making a short film. We filmed for four days our first shoot and then started realizing there was a really special story going on.

How was Joel when production began?

DO: When we first showed up, Joel’s health was relatively stable. Joel was terminally ill when he was one [year-old] and here he was at age four, no new tumors and nothing going away. It wasn’t remission but there was this sort of stability for the family just trying to deal with the day to day of those moments, doing occasional radiation, but no tumor growth when we started filming.

Documentaries of this type live and die by access. How much of their world did the Green family give you, and how did you avoid “overstaying” your welcome?

Malika Zouhali-Worrall: We were lucky. Ryan and [his wife] Amy saw what we wanted to do with the documentary [which was] part of the mission they had: use the video game to talk about this topic and show bereavement in a way they felt people don’t talk about enough. They were interested in all ways they could generate dialogue. From our view that was incredible because it meant Ryan and Amy were comfortable with cameras around, they were good at ignoring their presence.

Obviously there were times when David and I were uncomfortable because of the situations we were filming, but by that point we were a year or more into filming. There was a sense for us that if they’re not asking us to stop filming we have a responsibility to keep rolling because we’ve made a commitment, and part of that is to film very difficult moments. Obviously we can decide later whether [it] goes into the film.

Talk to me about the shape of the documentary. There’s few talking heads and it feels so vérité, so fly-on-the-wall.

DO: We like films engendering immersion. Our past work has been that and certainly there’s strength to interviews, but we were always interested in [following] the family as though you were there because that’s how we felt. We didn’t have the relationship of showing up for the day and leaving as perhaps a journalist would, so it felt disingenuous to rely on telling the story through sound bytes.

Being able to film their daily life with Joel and making the video game, that footage spoke most strongly when we started filming and editing. We wanted to let the day to day reality they were experiencing and what they were creating shine through. We wanted people to feel like passengers on the train as much as we felt like [that].

Do you feel being there influenced how the family behaved? That’s a common question in all documentaries but especially Thank You For Playing since it follows such an intimate time for them.

DO: I think discomfort was our end only. They were already in the process of self-documentation and we were kind of just another documentary presence in their lives.

MZW: While I think having a camera anywhere is always going to change how people behave, in the case of this film I think that was integral to the story because that’s what [Ryan and Amy] were doing with their game. The whole film is about a process.

In fact, this [was kind of] an ideal scenario. Presence becomes part of the story. There are moments in which the conversation happening with us as filmmakers [are in] there, Ryan speaking to us and sharing things that feels part of the story. You can’t set out for that to happen. I know when that did, such as when Ryan close to Joel’s death articulates what seems like a realization why he’s making the game and letting us film him, felt our process became part of the story.

What was it like at PAX Prime, the game’s public debut? You captured a lot of people being vulnerable. What was that like for you and Ryan?

DO: Those reactions were profound. We didn’t expect that people would be so moved playing this demo would give Ryan a hug and talk to him about their own experiences and ask him about Joel. Joel had just been diagnosed with several new tumors so it was a really difficult time for Ryan to be away from him, and also a very emotional time to see people’s reactions to this version of Joel and him.

I assume you had to have those players sign release forms to be seen in the film. Did anyone not sign?

DO: That first shoot, not a single person declined.

There’s no easy way to ask this, but what was it like shooting when Joel died?

MZW: That was definitely the hardest day working on the film. That same day we filmed the coming together of Ryan and Amy’s friends and family to essentially say goodbye to Joel. We were under the impression he was going to die in the next few days but we didn’t realize it would be that imminent even though he was in hospice care.

That was a really powerful and emotional moment to be filming and certainly one of the moments when you’re questioning your role as a filmmaker, but as I said before, you have to document these moments because they’re a crucial part of the story.

On that day we had a conversation with Ryan and Amy that we appreciated they hadn’t once asked us to switch off the cameras. We didn’t want to film the funeral, we just wanted to attend as friends, but we wanted to talk to them about that because we needed [to have that conversation] about the filmmaking process, something they were invested in too. The good thing is we were all on the same page.

How did you decide the end of the film? You chose not to follow the game’s commercial release, but there are a number of other ways it could have ended.

DO: The commercial release didn’t mean as much, in our opinion, as the conceptual finish. Because the Green family, we both thought, used the video game as not just a creative outlet but also a tool for dealing with this experience and sharing it with themselves and for living in that space. It was kind of Ryan’s kind of full-time job to create this video game for a year or so. Being able to do that meant that the video game’s evolution as an idea was really the story that we were following. It’s not like watching the sales go up and the reviews come out would’ve mattered much to the story. The video game was for themselves and other people certainly to share their love of Joel.

That Dragon, Cancer ignited heated debates where people questioned the Green family’s motives. Do you think opinions can change with your film?

DO: Without a doubt we never had any intent to engage with that debate because that wasn’t the story that we were interested in, nor was it the story that we ended up telling. We were intrigued by following the family’s experience and being present with the experience as they were going through it. That’s what we see when we watch the film. That’s what rings truest for us, that throughout history people have turned to art to deal with things that otherwise [are] difficult to deal with. I think that the family had this video game to help them get through this time was a beautiful thing.

MZW: I do think once people meet Ryan and Amy, it’s very rare people still have those opinions. Yeah, there are always going to be trolls, always going to be people who have a certain opinion. Definitely we noticed for the most part — obviously this has changed a bit now the game is available — it seems like the most [hostile] attacks often come from people who haven’t played the game or have not met Ryan and Amy. I do feel like if a lot of people could spend 80 minutes with Ryan and Amy I think it would be hard to level the accusations [at them].

DO: I’d also be curious to see how much of the negative criticism has come from people who have not experienced this. As someone who has also lost a loved one from cancer, I think in that experience there is very little to talk to to get through it. It’s a situation of people needing to turn to something, for some people it’s religion. For some it’s art. There is no wrong thing to do when you’re grieving.

Thank You For Playing will premiere in New York on March 18 and On Demand March 29.

More like this
Gaming
16 hours ago
Fire Emblem Awakening Is the Most Important 3DS Game Ever
By Hayes Madsen
Gaming
15 hours ago
MLB The Show 23 Release Date, Cover Athletes, Platforms, and Pre-Orders Explained
By Joseph Yaden
Gaming
13 hours ago
You need to play the best time-loop game on Steam ASAP
By Willa Rowe
LEARN SOMETHING NEW EVERY DAY.
Related Tags
Share: