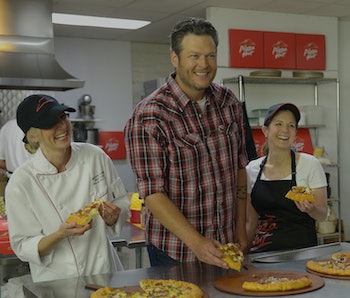 March 14 is Pi Day, but you already knew that. What you might not know is that if you play your mathematical cards right, you can win a bunch of pizza from Pizza Hut. All you have to do is go to the company’s website and be the first commenter with to solve an incredibly complicated math question. In all its Pi Day glory, here’s Pizza Hut’s announcement of the competition:

Nobody knows “pie” like Pizza Hut, but this March 14, Pizza Hut is dropping the “e” in honor of Pi – 3.14 – everyone’s favorite irrational number and challenging the popular belief that everyone on the internet is right about everything by partnering with acclaimed mathematical genius John H. Conway, distinguished professor of pure and applied mathematics emeritus, Princeton University.

Conway has channeled his mathematical genius into writing three math problems varying in level of difficulty from high school to Ph.D. level. These word problems will be released right here on the Hut Life Blog on National Pi Day, Monday, March 14th, 2016. The problems will be up by 8 am Eastern Time, and all of the great minds of the Internet will have the chance to solve them and the chance to win 3.14 years of FREE pizza (awarded in Pizza Hut® gift cards).

We might not be the genius-meets-Mick Jagger type like Prof. Conway, but if you tried to live on half a ‘za a week for the entire year we’re almost certain you’d die of starvation. An entire Pizza Hut pizza, at best, is around 3,500 calories. Consuming half of those calories a week is a one way ticket to malnutrition station. If you’re a champion, supplement your winnings with some carrots or something. Otherwise, good luck!