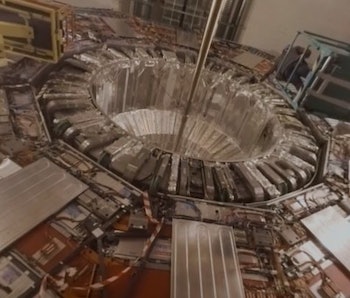 If you’ve ever wanted to tour the Large Hadron Collider but haven’t been able to make it to the border of Switzerland and France, you’re in luck! The BBC just created a 360-degree video of the particle collider at the European Organization for Nuclear Research, aka CERN, of Higgs boson discovery fame. Eagle-eyed viewers might spot a fire extinguisher, which is great for stopping small flames but won’t do much for microscopic black holes. But the best game of Where’s Wally to play on this tour is spotting all the goddam aluminum foil.

Duct tape might get the lion’s share of engineering love, but when it comes to experimental research stations with operating costs of a billion a year, aluminum foil is the real good stuff. It’s used so heavily because physicists need to achieve what’s technically called a “bake out” — essentially, protecting their fine-tuned vacuums from foreign matter.

Whenever a steel vacuum chamber is opened or develops a leak, atmospheric air can enter and create a thin film of things like water vapor or hydrocarbons. Once the leak is repaired or the chamber is closed, this residue disrupts the ability to achieve a high vacuum by gradually releasing a stream of molecules as the air is pumped out, preventing the chamber from being emptied enough to conduct research.

To make sure water vapor or other films don’t accumulate, researchers heat the tubes to remove volatile molecules. Covering the whole thing in foil ensures heat distributes nicely. As it goes the LHC is one of the largest steel tube vacuum systems in the world. Check it out:

More like this
Science
Jan. 28, 2023
ChatGPT could help students cheat — but it could also revolutionize education
By The Conversation and Sam Illingworth
Science
Jan. 21, 2023
Deep-sea mining could power a clean energy future — but there’s a cost
By The Conversation, Scott Shackelford, Christiana Ochoa, David Bosco and Kerry Krutilla
Science
Jan. 26, 2023
Can this new artificial skin transform touch screens and video games?
By Joanna Thompson
LEARN SOMETHING NEW EVERY DAY.
Share: