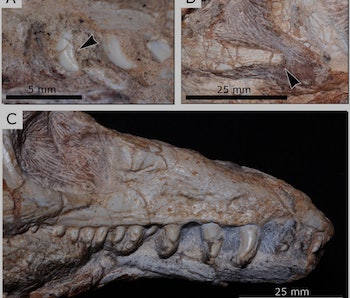 Meet Teyujagua paradoxa, an ancient crocodile-like reptile that is about to provide researchers with insight into the evolution of dinosaurs on Earth. Its 250-million-year-old fossil was discovered in southern Brazil last year, and the results published this week in Scientific Reports.

The name Teyujagua comes from the native language of the local Guarani people, and means “fierce lizard.” The beast, which grew to about five-feet long, would have stalked prey in the shallows of rivers and lakes. Its newly discovered fossilized skull is particularly interesting to paleontologists, because it narrows a gap in our understanding in the evolution of dinosaurs from their earlier reptile cousins. This new species represents a link — it shows morphological characteristics, including serrated teeth, that would eventually give rise to the Tyrannosaurus Rex.

We all know that a great extinction event wiped out the dinosaurs around 66 million years ago, probably caused by a large asteroid impact. It’s less obvious, but equally true, that earlier mass extinction events were crucial to the evolution of dinosaurs in the first place.

Teyujagua paradoxa lived soon after a different mass extinction event, one that occurred about 252 million years ago and was likely caused by atmospheric changes from volcanic eruptions in what is now eastern Russia. That event wiped out 90 percent of of the species on Earth — That’s part of the reason why the fossil record from that period leaves so many questions unanswered.

We like to think of extinctions as evolution’s opposite, but in a way, it’s evolution on speed. In the wake of a mass die off, the survivors spread out and procreate, yielding rapid speciation. The Archosauriformes are a great example of this process. They are a diverse grouping of species that include dinosaurs and pterosaurs, as well as all modern-day birds and crocodilians, and they branched off from the evolutionary tree at an even earlier extinction event, about 260 million years ago.

Teyujagua paradoxa is not an Archosauriforme, but a close cousin, and its physical characteristics tell us something about how the dinosaurs rose to power. Both of these early extinction events were, apparently, critical in the evolutionary history of the Archosauriformes.

The earlier extinction, at the end of the Guadalupian epoch, allowed them to spread out and diversify, but not to become major players, the authors of the study write. It’s after the next mass extinction that these reptiles will really made their move. “During the faunal recovery the Archosauriformes underwent a major increase in abundance, size and species richness, becoming the main terrestrial predators, and later expanding to also dominate large herbivorous niches,” says to the article.

All this is not to imply that extinctions are a good thing. We should be profoundly worried about the shocking decline of global diversity underway on the planet. But in the long run — the millions-and-millions of years run — life usually finds a way. Even in a radically new environment, some species can survive, and adapt, evolve, and then thrive.