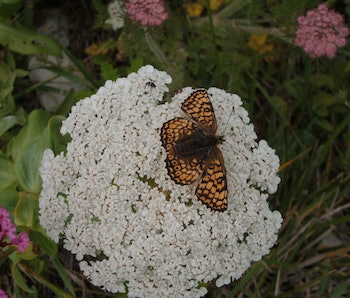 Well, there’s good news, and there’s bad news. This new study has found that, on the one hand, butterflies adapt very quickly to changing environments at a genetic level, which helps them survive as habitats are wiped out by encroaching farmers’ fields. On the other hand, that speedy adaptation in many cases may not be speedy enough — the Glanville fritillary butterfly, despite this adaptation, went regionally extinct in a Finnish archipelago in the 1970s.

The research, recently published in the Proceedings of the National Academy of Sciences, examined the genetic makeup of different populations of the butterfly species. The geneticists used museum specimens of the now-extinct population and compared them with a population that was re-introduced into one island in the area 24 years ago. Both of these populations found themselves in areas of high fragmentation — meaning that subpopulations are kept mostly separate from each other, either because the local ecosystem is naturally fragmented, or because of encroaching human development. Fragmentation hurts the genetic diversity of a species by limiting inter-breeding, which in turn makes the butterfly less resilient to threats.

What’s interesting, though, is that both of these butterfly populations had evolved at the genetic level to partially compensate for the fragmented landscape. The insects with a genotype associated with colonizing new environments, for example, was more likely to be present in these populations. The recently introduced butterfly colony is naturally fragmented in a network of 51 meadows.

“All local populations have gone extinct at least once during this period, and hence the very persistence of the metapopulation is definitely due to frequent recolonizations compensating for local extinctions,” the study’s authors wrote.

But for the butterflies of the archipelago, this evolutionary adaptation just wasn’t enough. The threat of encroaching agriculture eventually wiped out the Glanville fritillary butterfly completely in that area.

The question of how well species can adapt to a rapidly changing environment is, for obvious reasons, a big one. It’s not just climate change — habitat loss is also a major contributor to global extinctions, as humans take up more and more space for cities, agriculture, and resource extraction.

Butterflies may be able to evolve in a short period of time in response to changing conditions. Their lifespan, after all, is only about a month. But large mammals like the polar bear will evolve more slowly, since they have fewer offspring and much longer periods between generations — thus creating lengthier windows for adaptive genetic mutations to arise.

The polar bear’s greatest hope, then, is adapting its behavior to changing conditions by finding new territory and new sources of food.

The lesson of the butterfly is that even a very adaptable species will be vulnerable in the face of a rapidly changing environment. Scientists are mostly in agreement by now that humans are causing the sixth great extinction event that this planet has ever seen. That’s a problem not just for the butterflies and the polar bears, but for humans as well. Just as the butterfly suffers from a lack of genetic diversity within the species, the ecosystems of the planet also become impoverished by declines in biodiversity. When that happens, humans lose access to the things that healthy ecosystems provide — clean air, fresh water, and nutritious food.