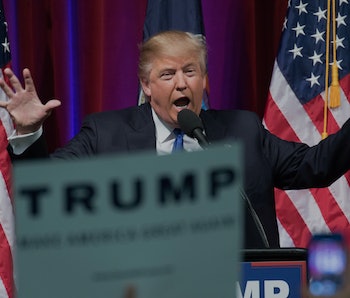 Because the 2016 primary season hasn’t been ridiculous enough, Henry Kraemer of Portland, Oregon has created a political action committee with one very particular goal: exposing the truth about Donald Trump’s tiny baby hands. The New York billionaire’s hand size has become a news item recently after fellow candidate and perpetual primary also-ran Marco Rubio took an ill-advised swipe on the campaign trail: “You know what they say about men with small hands,” he said, before pausing like a middle schooler on the brink of cursing. “You can’t trust ‘em!”

The dig subsequently led to what might go down as the single most awkward moment in the history of American electoral politics, when The Donald took to the stage at a Fox debate to defend his junior member in front of God and country.

Kraemer’s PAC is not affiliated with any party, committee, or organization, but rather seeks to raise questions he feels any prospective voters will need answers on before they cast their ballots: “When a call comes into the White House at 3 a.m., will Donald Trump’s tiny baby hands be able to lift the phone receiver?” Kraemer, along with a group of volunteers, have already filed paperwork with the FEC. The now legit political action committee even published its website Wednesday, complete with newsletter (“Tiny Hands, HUGE News!”). With a slogan of “Lend a hand to help get our #ReleaseTheMeasurements ad on TV!”, the website is currently accepting donations.

While the new PAC is obviously a Colbert-esque attempt at lampooning the New York billionaire — and the GOP primary process as a whole — Kraemer is dead serious about raising enough money to start running actual ads on the issue of Trump’s allegedly stubby digits.