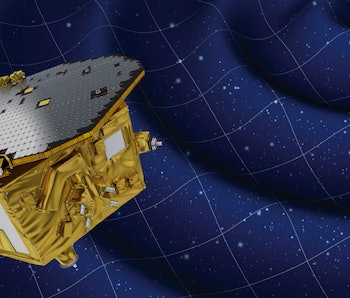 The world — save for the nightly news — freaked out with pure nerd joy when gravitational waves were discovered in February. The minuscule ripples nestled in the space time continuum first predicted by Albert Einstein were real — and their discovery meant a new world of gravitational astronomy.

Now we’re poised to learn more about gravitational waves because of the LISA Pathfinder. The ESA spacecraft that launched in December is now more than 900,000 miles away from Earth, and has begun to conduct the first of its planned experiments. After a week of successful trials, the official testing for gravitational waves has begun on the demonstrator satellite mission.

While gravitational waves were first sniffed out by ground-based LIGO detectors, the LISA Pathfinder was the first instance of testing for gravitational waves in space. The overall project, led by researchers from the Albert Einstein Institute in Hannover and the Institute of Gravitational Physics at the University of Liebniz, will comprise six months’ worth of experiments, and by the end of it scientists hope to understand the physical forces of gravitational waves well enough to construct a successful future observatory in space.

With this sort of “future observatory,” we could probe “some of the most massive and powerful objects in the universe.”

Within the LISA is the “most perfect fundamental physics laboratory ever flown in space,” as described by the ESA. And to test for gravitational waves, the LISA Pathfinder is designed to achieve perfect free-fall — during which the team on the ground will activate the release of two test masses into a vacuum chamber. These are identical tiny, 2-kg gold-platinum cubes, and the goal is to see if their fall is only controlled by gravity. It’s important that the cubes are in an environment that is extraordinarily still, so it can be proven that the only thing jiggling them about is gravitational waves.

“We are absolutely thrilled by how well our first set of experiments went,” says Karsten Danzmann, co-principal investigator of the LISA Technology Package in a press release. “For the next weeks we have a tight schedule of experiments to run on the satellite, which will ultimately show that we can build a full-scale gravitational-wave observatory in space.”

More like this
Science
6 hours ago
This concept spacecraft could swiftly send a one-ton spaceship to the edge of the Solar System
By Matt Williams and Universe Today
Science
Jan. 13, 2023
This supermassive black hole takes long snack breaks, new model suggests
By Doris Elín Urrutia
Innovation
Jan. 16, 2023
In a wild first, physicists used lasers to control lightning on a mountaintop
By Max G. Levy
LEARN SOMETHING NEW EVERY DAY.
Related Tags
Share: