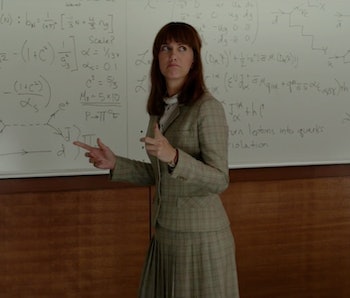 Kristin Wiig will play badass particle physicist Erin Gilbert in the new Ghostbusters, coming to theaters to this July. In the official trailer, which dropped Thursday, fellow ectoplasm blaster Abby Yates, played by Melissa McCarthy, tells her: “Erin, no one’s better at quantum physics than you,” as the camera pans over a whiteboard covered with a convoluted mess of complicated-looking equations. As it turns out, these are not only believable but also scientifically ambitious, according to University of Maryland experimental physicist and professor Elizabeth Beise, Ph.D., who helped Inverse fact-check Wiig’s whiteboard.

“It all kind of makes sense, as much as I can understand it.” Beise says. “They probably did have somebody write something down that looked pretty close to being right.”

It’s obvious, she points out, that Wiig’s character is estimating the rate of proton decay — a field that’s eluded the best physicists for years. “It’s kind of a hot topic,” she says. “If proton decay were actually experimentally seen, it would be very, very significant. “

This much, of course, is obvious from the equation at the bottom center of the board, which says “Proton Decay.”

To the right of this equation, however, is a Feynman diagram, which is how physicists represent the mathematical expressions describing the behavior of subatomic particles. “All of that is quite sensible,” Beise says. “This particular little drawing here actually violates a very fundamental symmetry of nature. That’s why proton decay would be so exciting.”

“Here, she explains, the combination of the u, u, and d represents a proton; the Greek pi with the subscript zero represents a “quark-antiquark bound state.”

To the right of the Feynman diagram are several other constants that a physicist would recognize. The Greek alpha above, Beise explains, is a well-known parameter called the fine-structure constant, which tells you about the strength of electromagnetism. Below it, the Greek alpha with a subscript s tells you about the “strong interaction” — the nuclear force between two quarks. To the extreme left of the whiteboard, under the heading “Couplings,” are a series of gs, which suggests she “must be speculating about additional particles.”

“People have been looking to observe proton decay for a long time, and there are limits that are very astronomical,” says Beise. “If there’s physics out there that we’re not aware of, [this is] what a theoretical physicist would try to do — look and see if there’s some mechanism of something happening in the universe that would indicate a signal.”

Proton decay has eluded scientists for decades, says Beise, explaining that such experiments often take place in a huge water tank detector, like the Super-Kamiokande under Japan’s Mount Ikeno. Very broadly speaking, these experiments consist of a whole lot of waiting to see if the signal from a decaying proton — the charged positron in the Feynman diagram — will show up as a flash of light.

But the most important part of the whiteboard isn’t an equation at all — it’s a website. At the top center is a series of “variables” that spell out the website ParanormalStudiesLab.com, which leads to a video of MIT particle physicist James Maxwell, Ph.D., explaining that much of the science he assisted with in Ghostbusters has to do with creating — and now this all makes sense — the quintessential ghostbusting tool known as the proton pack.

Later in the video, Maxwell goes on to corroborate Beise’s assessments by explaining that an MIT colleague had worked with the filmmakers closely “to make sure the blackboards and all the papers you see strewn around the laboratory are accurate.”

It seems as though scientific theories to back up ghostbusting weapons could exist — at least hypothetically. Whether they could ever be applied IRL remains to be seen — Maxwell points out it’d be hard to pull off the large-scale science required for a cyclotron on top of a backpack — but for a movie that deals with hypotheticals and ghost slime, the details are remarkably and commendably sound.

“I don’t know whether the equations are right or not,” says Beise. “It looks real to me.”

More like this
Science
Jan. 29, 2023
Does the Doomsday Clock actually mean anything? Experts weigh in
By Jon Kelvey
Science
Jan. 28, 2023
This concept spacecraft could swiftly send a one-ton spaceship to the edge of the Solar System
By Matt Williams and Universe Today
Innovation
Jan. 16, 2023
In a wild first, physicists used lasers to control lightning on a mountaintop
By Max G. Levy
LEARN SOMETHING NEW EVERY DAY.
Related Tags
Share: