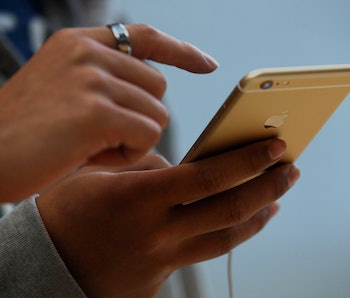 Apple’s push for more transparency and more user privacy is happening on more than the judicial and congressional levels. The next iOS update will feature a clear and constant reminder that company-owned devices are in fact company-owned and monitored.

The iOS 9.3 update adds a permanent “This iPhone is managed by your organization” message on the bottom of the Lock Screen and the top of the About page for all company-owned iPhones being supervised with Mobile Device Management (MDM).

This addition to the update — which is expected to be released this month — is to make sure that users don’t forget that their employer’s IT department can monitor whatever action made on a company device that they wish to monitor. This means location tracking, internet traffic, you name it. Which makes sense. They do own the phone after all.

This doesn’t mean Apple is caving to the FBI, or that it is allowing big corporations access into your private personal data. Each iPhone will still be encrypted if it requires a password, PIN, or fingerprint to open.

What it does mean is that Apple is siding with each personal user for complete transparency on who can access the devices being used and when they are being accessed. Companies can keep track of phones with iOS 9.3 in the same way they could in the past with MDM. The only difference is that people will be much less likely to forget the fact that they shouldn’t be conducting scandalous Google searches with their work phone.

According to Reddit user MaGNeTiX — who first drew attention to the update feature — the message only shows up on phones being supervised, not on every phone running MDM. Also worth noting: iOS 9.3 is still in beta mode, so this could change before it’s made available to the public.

Both the message on the lock screen and the message in the About section will increase transparency on which devices are — and are not — private. It’s just one of many of Apple’s recent commitments to letting users know exactly how their information is being used and stored.

iOS 9.3 is expected to be released along with the new iPhone SE and iPad Pro product announcements on March 21.

More like this
Innovation
5.7.2022 12:00 AM
The 5 best iPhone battery cases
By Masha Vapnitchnaia
Innovation
19 hours ago
China and Russia are on track to set up a Moon base by 2036 — here’s the plan
By Allie Hutchison
Innovation
5.18.2022 6:37 PM
One simple thing makes the Nissan Z a perfect sports car
By Jordan Golson
Related Tags
Share: