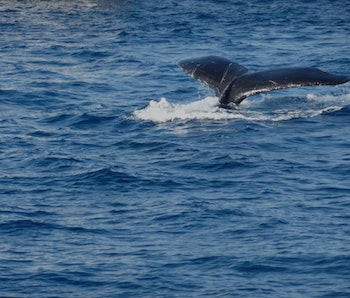 Purnima Ratilal, an engineering professor from Northeastern University, has a developed a new device that classifies and monitors whales in real time over thousands of miles, using underwater microphones.

The new tech uses an array of 160 microphones to listen to a section of ocean the size of Tennessee. Researchers used resulting data to distinguish between the calls of eight whale species — blue, fin, humpback, sei, minke, sperm, pilot, and killer — and track their locations. The findings were published this week online by Nature.

“[Ours] is the only technique that can instantaneously monitor marine mammal and fish populations over very large areas,” she tells The Atlantic.

The scientists came to a surprising conclusion. Whales divvy up the feeding grounds of the ocean, much like the plant-eaters of African grasslands. It’s unknown how these boundaries are imagined or enforced.

Traditional methods of researching whales involve listening to whale sounds on a small scale, or visually watching and tracking individual pods. This new technology, dubbed passive ocean acoustic waveguide remote sensing or POAWRS, provides a better macro picture of whale habitats than has ever been seen before.

Certainly whales hold many secrets left to be discovered, and this will help researchers peer into their world.