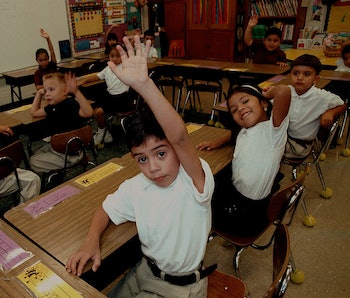 To be successful, students must have built up a certain amount of grit: That mixture of resolve and courage we all think we have to deal with tough situations, but how schools are measuring grit and other emotional skills is actually quite flawed, says the person who literally wrote the book on grit.

Angela Duckworth, a psychology professor at the University of Pennsylvania and a 2013 MacArthur “Genius,” is speaking out against the tests currently being rolled out in nine California school districts as early examples of what socio-emotional examinations will look like.

“I do not think we should be doing this; it is a bad idea,” Duckworth told The New York Times on Monday. She recently resigned from the board of the group spearheading the changes in California, saying she couldn’t support the tests that are being implemented.

Current students in the trial districts fill out surveys asking questions like how prepared they think they are when they go to school and if they think it’s more important to be talented or to be hardworking. The higher the “grit” — the ability to work towards long-term goals through hard work and self-control — the higher the score. When the new regulations are fully implemented, the plan is for social-emotional learning to count for 8 percent of the school’s overall performance score.

While Duckworth has extensively researched the benefits of grit, she argues that it is not something that can be whittled down into standardized testing. In a paper she co-wrote with University of Texas at Austin professor David Yeager, Duckworth argues there is no reliable way to test for grit on a mass scale; doing so could actually make things worse for students.

While non-cognitive qualities like grit and self-control are proof-positive predictors of academic, social, and economic well-being, there are serious limitations to self-reported questionnaires. These include a chance for misinterpretation or lack of insight by the survey taker, and group biases (e.g. saying what seems like the right answer) that affect normal responses. The researchers emphasize that while tests on grit have proven correct in scientific settings, that doesn’t mean they would work on a large scale. If anything, a better chance of measuring non-cognitive abilities would be to issue a wide variety of tests.

“We share this more expansive view of student competence and well-being, but we also believe that enthusiasm for these factors should be tempered with appreciation for the many limitations of currently available measures,” they write. “Our claim is that not everything that counts can be counted, or that everything that can be counted counts.”

More like this
Science
Jan. 28, 2023
How does the placebo effect take hold? A doctor explains two influential factors
By Kathryn T. Hall. and The Reader
Science
Feb. 4, 2023
Why ChatGPT Could Usher in a New Era of Scientific Discovery
By Brian Lucey, Michael Dowling and The Conversation
Gaming
Jan. 25, 2023
"Mindboggling" Launcher layoffs prompt outcry and tributes to WaPo gaming vertical
By Jess Reyes
LEARN SOMETHING NEW EVERY DAY.
Related Tags
Share: