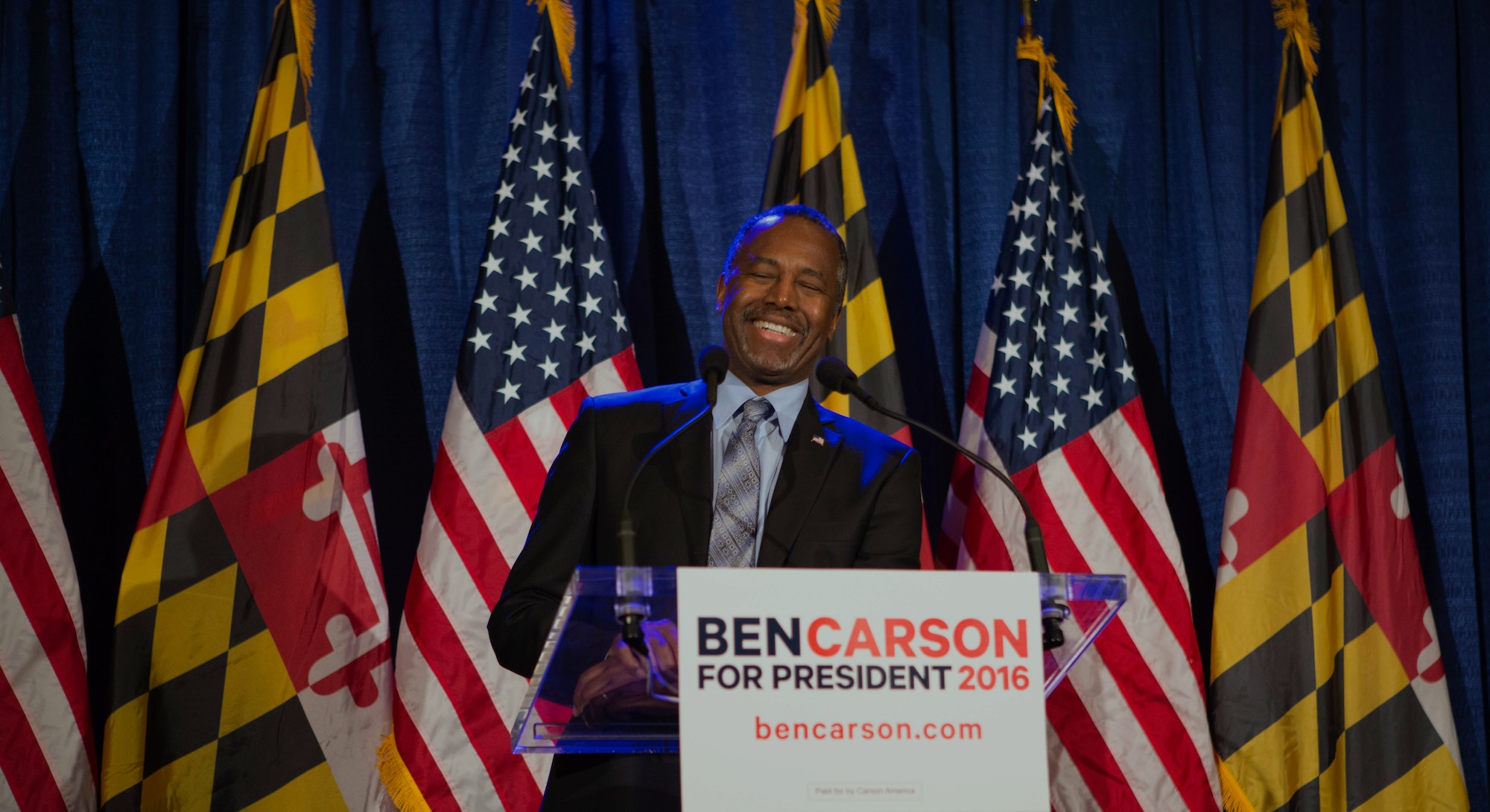 After Super Tuesday, it was just a matter of time before Ben Carson, the brilliant doctor and thoroughly outmatched Republican presidential candidate, put his campaign down for good. He’s not out yet, but he’s swirling the drain. His final delegate count will stand at just eight, while the year and the party so far have belonged to the other non-politician in the GOP field — a human gas leak your browser knows only as Donald Drumpf — has racked up 285. Voters were plainly ready for a non-politician to shake up the party; they just were sorta hoping for Donald Trump, the lovechild Charles Foster Kane had with a timeshare sales rep who smoked during pregnancy. Carson — whose deficiencies on the Republican campaign trail included his tendency to be considerate and to think before speaking — never stood a chance.

Unless Trump picks him as a veep (which could happen), Carson’s destined to go down as one of the more curious footnotes on this demented election cycle. He was far from a natural campaigner. His self-peddled fables about thwarted stabbings and Yale morality plays kept resurfacing as “sure, dude, whatever” moments. An NPR host used the presidential SAT word “debt limit” in an interview and totally lost him.

Within a year, Carson went from a likable if unorthodox long-shot candidate in an up-for-grabs GOP field to being a national joke. To wit, here’s Trevor Noah absolutely shredding him to a degree Trevor Noah rarely achieves:

Which sucks, because aside from his decision to wade into the open sewer that is American electoral politics, Carson has been a straight-up baller his whole life.

A few resume highlights: Yale grad, Michigan medical school grad. Named director of pediatric neurosurgery at Johns Hopkins at age 33, youngest ever. Managed and directed an unprecedented separation of two cranially conjoined twins. Author of six books (which to varying degrees, yes, were probably hot garbage, but still, books). And, significantly, he was an Obama figure before we had a President Obama.

Look back at this clip from The Wire Season 4; it’s going to turn 10 this year just before the general election in November. In it, you see an experimental class aimed at troubled students — the roughest of the rough, really violent and disturbed kids in rough-ass Baltimore. The teacher asks: “Where do you see yourself in ten years?” Someone cracks wise about playing for the Lakers, and then a chubby eighth grader named Albert says, “I wanna be a pediatric neurosurgeon like that one nigga.” In the back, the professor who designed the class helps him out: “Ben Carson.” Albert replies, “Yeah, that dude.”

Albert up till then was just about the worst kid in the worst class in one of the worst schools in the city. But there he was, putting Carson on a pedestal above the Lakers. Granted, with Carson at Hopkins, the doctor was a local Baltimore hero, but still. The Wire doubled down two episodes later, when one of the homicide detectives, Bunk, talks with another detective, McNulty, and their kids. Again, the question to the young’uns is, what do you want to be when you grow up? It’s the sort of callback The Wire always did so well, folding class and society into an intricate origami. McNulty’s kids, who are white, say video game designer and rock star. Bunk’s elder kid answers “chief of police.” The dad has to answer for his quiet younger kid: “He’s still in that, y’know, pediatric neurosurgeon stage.”

There are shitloads of video game designers, of rock stars, of police chiefs, and, hell, comparatively, even Lakers. But there’s only one pediatric neurosurgeon who would’ve commanded this kind of reaction — and, not to ignore the obvious racial overtones here of black kids citing their top aspiration, it’s Carson’s race that makes him so relevant to inner-city Baltimore kids. (Hell, try to name another pediatric neurosurgeon. It ain’t a deep top-of-mind bench.) I realize The Wire is fiction, but even making the reference points to how powerful a character Carson was — and still is, or should be, outside of his noodly-doodly debate performances.

Ben Carson shouldn’t be president, but mostly because absolutely no one should be. Once he formally drops out of the race, I’m hoping he gets to stop being a punchline and goes back to being the Kobe Bryant of doctors.