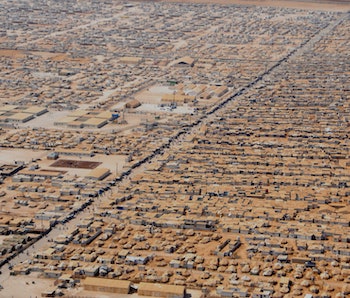 The recent severe drought in Syria “has likely been its worst in 900 years” according to a new report from NASA’s Goddard Institute for Space Studies. The findings bolster the claim that climate change played a role in causing the drought and suggest that the ongoing civil war in Syria may have roots in environmental disturbances stretching back to at least 2005.

The very immediate takeaway here is that in an increasingly hostile planet where traditional weather patterns get scrambled, the Syrian civil war, its myriad casualties, the resulting refugee crisis, and the reverberations through world politics are all a preview of future climate-affected upheavals.

“These recent drought events have motivated a lot of concern that this could be an indication of climate change, with the eastern Mediterranean and Syrian droughts being the most obvious, Ben Cook, a scientist who worked on the study, told The Guardian.

By examining tree rings across the Mediterranean for evidence of past dry periods, the team concluded the region has not seen a drought of this magnitude in at least 500 years, if not closer to a millennium.

“What we’re seeing is a convergence of evidence of the climate change impacts in the region,” Cook said.

The climate models predict further drying of the region, with greater potential for more severe droughts across the Mediterranean. Besides being simply disastrous for local communities and economies, some evidence exists that the drought and violence created something of a positive feedback loop. The severe droughts that began in 2005 initiated the internal displacements of about 1.5 million people by 2010, mostly farmers from the rural north of the country, who came down into the cities looking for food and work. Between these climate refugees and the refugees from nearby Iraq, the urban areas of Syria swelled by 50 percent.

The military conflict began when Arab Spring protests spread to Syria, bringing tens of thousands of young Syrians into the street. The protesters criticized Syria’s president Bashar Al-Assad’s inability to provide jobs, housing, and sanitary conditions, all issues the droughts had exacerbated.

Al-Assad’s brutal crackdown on the protesters launched the country’s descent into the current brutal civil war — now five years old, with 300,000 deaths. But the role of the drought remains important as a precursor to coming challenges. Countries around the world are already struggling to cope with more than 4 million people who have fled Syria during the civil war, including 1 million who journeyed to Europe to find safety and a new life.

As many as 200 million environmental migrants, also known as climate refugees, may find themselves displaced by 2050 due to climate change-related environmental disasters. Drought and flooding as well as severe hurricanes, earthquakes, and typhoons have all been linked to human activity around the world.

“This evidence also strongly implies that expected future drying will further stress resource availability and the lives of people in this region,” Colin Kelley, a drought scientist who has studied the region previously, told The Guardian.