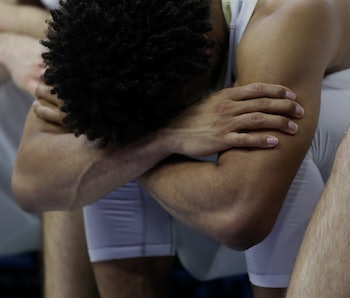 Sports makes us do dumb things. We jump for crappy t-shirts shot from cannons, root for the Chicago Cubs, and abstain from sex before a big games. Fandom and athlete superstition are both bizarre, but maybe not as bizarre as we think. At least that’s the case Tufts psychologist Sam Sommers, who co-authored This Is Your Brain on Sports with Sports Illustrated executive editor L. Jon Wertheim, makes in his book.

Sports, Sommers says, are life, and the irrational behaviors we see in the most die-hard fans are essential the same as behaviors we see outside the arena. Things are just amplified when people start wearing uniforms. Sommers explained this theory to Inverse while also touching on why we always end up buying from Amazon, why Manny Pacquiao is an effective politician, and how Donald Trump became a Republican frontrunner.

In your book, you discuss how feeling “disrespected” motivates Floyd Mayweather in the same way self-deprecation drives Rafael Nadal. Do these strategies work for non-athletes, or are these an example of sports-related behaviors we shouldn’t encourage?

You hit upon, what is in some respects still an ongoing debate in the research literature and the psychological literature. There’s a school of thought that refers to positive illusions as being an essential ingredient of normal, healthy functioning. This idea that we sometimes lie a little bit to ourselves in how we see ourselves, whether it’s setting up false narratives, whether it’s sometimes the opposite — seeing ourselves as better than we really are, not responsible for our own failures. These kinds of strategies that we sometimes unconsciously engage in, some would argue, are somewhat adaptive strategies for functioning well. We need these sorts of buffers and hedges against the ego threat that failure will bring. And that’s a good thing.

There’s also a school of thought, of course, that if we continually do that, in the long run we’ll have negative consequences of a variety of types. Whether it’s our work colleagues getting tired of hearing us say, ‘Oh, I’m never gonna get this done,’ ‘I’m never gonna do a good job on this project,’ — and then we do, and that’s annoying. The idea of sandbagging to the point were you really do undermine your own behavior.

Then there’s the human tendency to root for the underdog. How can we take that into account as we head into the thick of, say, the Presidential campaign?

Every political candidate — well, maybe not as much Donald Trump — but everyone likes to tout his or her rags-to-riches story. Even Trump, from a family standpoint, might do that. And, for that matter, we get to the debates: Every politician likes to sandbag his or her chances, make it sound like, well, my opponent’s a Rhodes scholar and a champion debater, and I’ll be lucky if I’m still standing at the end of the 90 minutes.

We do love the underdog. Don’t get me wrong. But that is often a brightly burning but short-lived love affair…. We root for the team that’s not favored to win in the World Series or the Superbowl. But at the end of the day, who is it that we buy the jerseys of, the pennants for, the memorabilia from? It’s the Yankees, the Patriots, the Lakers and now the Warriors — it’s the teams that are winning.

We’re drawn to the mom and pop shops. People will tell you they want to buy local, but at the end of the day, they don’t put their money where their mouth is. They buy from Amazon.

It wouldn’t be a stretch to say that Trump is painting himself as an underdog.

You know, it almost sounds like something Yogi Berra would say: “That restaurant’s so crowded, nobody goes there anymore.” People are rooting for him because everyone is sure nobody is going to vote for him. Jon Stewart and Stephen Colbert have always done great parodies of this — ‘I was a [son] to a goat herder,’ all of these exaggerated stories about politicians — but it’s pretty common. In this race, we have Rhodes scholars and multimillionaires and billionaires, but there’s still this touting of the rags to riches.

There seems to be a tendency to think leadership and success in sports can translate to other fields, like politics — just look at Manny Pacquiao, who’s about to run for the Philippine Senate and will probably win. Is this an example of the same “halo effect” that causes us to find NFL quarterbacks attractive?

There are other examples of athletes turned politicians. For example, Jim Bunning, Senator from Kentucky; Steve Largent, wide receiver for the Seahawks. I’ll tell you where else you see it: Every single successful coach has now written a book about leadership that business people buy. And again, they are leaders of organizations and businesses, but it’s a good question — to what degree does leadership in one area translate to another? Carly Fiorina runs for President on the premise that her business leadership, without having held political office, prepares her to be a President. In the Pacquiao example, he’s more than a celebrity, especially in particular populations, so to what degree are we doing what we talk about in the book — the “halo effect” — where we see him as successful, we see him as famous, we see him as very familiar, perhaps we see him as attractive. These things carry over and make us see him as a leader and as other things as well.

You’ve shown us how psychology can explain our irrational behaviors relating to sports. On the flip side, are there any behaviors that sports have shaped?

One thing that’s really interesting to me about sports is that it is the rare domain where we’re almost willing, in some respects, to admit to or even embrace our own hypocrisy. We don’t do that very well in politics or in other walks of life. In sports, interestingly, we’re almost willing to admit that for this player on any other team, I would criticize and excoriate him and criticize him for steroid use and these accusations and his behavior on the field. But he’s my guy, so I’m going to root for him. Jerry Seinfeld is the one who said it, famously — we’re almost rooting for laundry, the city on the shirt that they’re wearing, as opposed to the individual.

It’s a bit of a release valve that allows us to know that we are rooting for something that yes we care deeply about but isn’t life and death and isn’t the end of the world. Therefore, we almost feel a little bit liberated to engage in some of the biases that, if you accused us of in other domains, we would never admit to.

In a way, sports almost seems to hold the same psychological place for humans as religion.

I don’t say this to be trivializing or demeaning to those who have very strong held religion beliefs, but people who have very strongly held sports-related beliefs act in much the same way. You see the same sort of tribalism that you see with religion or other identities; you even see rituals. Whether we’re talking about a certain cheer that’s said at the stadium after a certain kind of play, whether we’re talking about a certain chant, an animal or mascot that [appears] at a certain point in the game. These rituals have a way of bonding us with the other fans that are there as well as bonding us to the team and increasing our sense of loyalty. Again, we’re talking about words like “rituals” and “tribalism” and talking about an affiliation that certainly colors the way you see what’s going on in front of you. That does share a lot in common with other identities.

Has research for this book changed the way you enjoy sports now?

I will admit that as a social psychologist — someone who studies the science of everyday life — I am often, whether I’m at the movies or with my kids at a sports event or coaching — thinking, ‘What does this really mean?’ or ‘Why are people behaving this way?’ That’s the mindset I’m often bringing to these kinds of daily interactions, which can make me kind of irritating to hang out with, I presume.

There are certainly insights in the book that changed the way I approach things. There’s the hypocrisy chapter — the idea that our moral compass is incredibly flexible, sometimes laughably, so — and I do try, even when watching sporting events, to tell myself ‘Okay, there’s another side to this, I can see how someone could make that call.’ We don’t necessarily do enough of that in life. We generally jump to conclusions that are more self-serving. I do think about that a little bit more.

More like this
Mind and Body
Jan. 30, 2023
Does the Best Workout Exist? Exercise Scientists All Agree on One Thing
By Katie MacBride
Mind and Body
Feb. 1, 2023
Why the future of periods could be none at all
By Elana Spivack
Mind and Body
Jan. 31, 2023
Why Is My Skin Worse in Winter? 5 Conditions Dermatologists Watch out For
By The Conversation, Jeffrey Chen and Sonal Choudhary
LEARN SOMETHING NEW EVERY DAY.
Related Tags
Share: