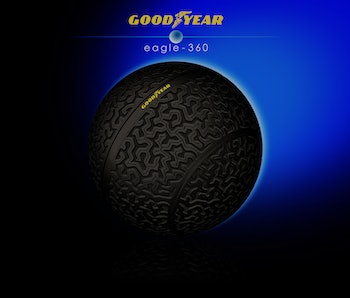 Everything about Goodyear’s new tire concept is designed for the future. The rubber balls, which conjure memories of dodgeball, are aimed at a future in which 85 million autonomous-capable cars are sold annually. These 3D printed tires are, just to reiterate, spherical, which means they offer drivers true 360-degree motion. But in order to capitalize on that capability, Goodyear will have to attach them to a car, which is obviously no small trick. The Eagle-360 forms and maintains a connection using magnetic levitation, braking and accelerating on the strength of magnetic fields.

It’s a hell of an engineering feet. One that automotive thinkers first dreamt up decades ago, but haven’t been able to realize until now.

And that’s not even the whole pitch. The Eagle-360’s treads employ biomimicry to emulate the pattern of the brain coral, as “its multidirectional blocks and grooves help to secure a safe contact patch,” according to a breathless Goodyear press release.

The tires won’t go into production any time soon, but the concept addresses some of the issues that are already arising in the earliest years of autonomous driving, particularly regarding safety. So far, autonomous cars have proven maladapt at handling the slipping and sliding of wet and snowy terrain. The enhanced maneuverability of spherical tires would allow the “tire to move as needed to reduce sliding from potential hazards, such as black ice or sudden obstacles, so it contributes to staying on a safe path.”

And the tires offer some interesting parking perks as well. Cars would be able to slide in and out of tight spots with a lot less difficulty, allowing us to fit more cars in less space, causing a hell of a lot fewer headaches.

It should come as little surprise that Goodyear is releasing the first set of spherical tires now. The idea has been around for a long time, but the technology demands greater control than a human driver can hope to provide. So with all the dreaming about autonomous driving, it makes sense that tire companies would want to include their coolest tech in the general fantasy of the future of driving.

Goodyear is by far the most high profile example of investments in spherical tires, but recent years have seen some other encouraging signs. A team of students at the Charles W. Davidson College Of Engineering at San Jose State University designed a motorcycle in 2012 with two spherical wheels, though the prototype never hit the 10 mph goal.

In fact, after nearly three years of radio silence from the San Jose University team that calls itself the “Spherical Drive System,” the group posted on its Facebook page on Monday that they would be putting their technology up for auction. Everything you need to jumpstart your challenge to Goodyear can be yours for about $30,000.

Goodyear expects that, by 2035, car manufacturers will be selling 85 million autonomous cars annually. Even if spherical tires only make it into the higher end vehicles by that time, that’s a pretty significant market. And there’s no doubt, luxury brands are already salivating at the idea of putting out the first levitating, 360 degree, autonomous vehicle.