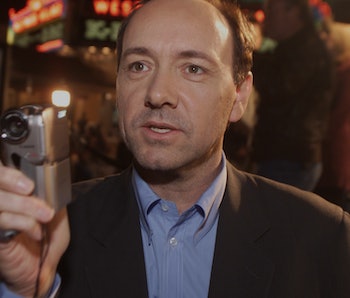 I needed something to wash away the taste of the The X-Files reboot. I was anxious about the return of House of Cards, a terrible show I still can’t stop myself from watching. In the first half of this strange and dark year, Kevin Spacey is not only dropping the show’s fourth season, but a movie where he plays Richard Nixon hanging out with Elvis, and something called Nine Lives — seemingly, a CGI cat version of Tim Allen’s The Shaggy Dog remake co-starring Christopher Walken. I was disturbed and confused, and craved escape, to a simpler time in both the history of sci-fi and Kevin Spacey’s career.

So I decided to watch 2001 Spacey star vehicle K-PAX. I thought the experience might be therapeutic. It could be a chaser for the miserable new X-Files and a suitable, blow-dulling pre-game for the inevitable House of Cards catastrophe.

K-PAX is, after all, essentially a two-hour-long X-Files episode in the classic style. Spacey — with no Southern accent or fourth-wall-breaking — plays the “monster of the week” as E.T.-in-a-human-body “prot” (yes, no caps). prot descends to Earth in sunglasses seemingly just wander around, hang out in trees, and condescend to everyone.

Unfortunately, there’s no Mulder to come believe prot’s tale of space travel and a distant solar system. The movie, then, is forced to focus on prot convincing everyone that he’s an alien — mainly Jeff Bridges, who plays psychiatrist Mark Powell. K-PAX is a shining example of one of those bright-filtered, dreamy turn-of-the-millennium speculative dramas à la Bicentennial Man, S1M0NE, and Contact. Released just after 9/11 but shot and produced before it, the film is a glimpse into a simpler time — blissfully devoid of real conflict and content, shrugging off clear resolution. One really underestimates how different the blockbuster film was 15 years ago. Weird one-off ideas could still reign at the box office, and be pushed to production; speculative and sci-fi movies didn’t only come in the form of stuff of franchise films and big-name directors. Going to a bad movie used to be a lot more fun; genres were more indeterminate.

“Your planet is so bright,” prot murmurs to cops when he appears on Earth … in Port Authority. He’s so annoying that they arrest him on the spot. No, it’s not “hallucinogenics,” guys; he’s just terrible. Right from the jump, you get the main thing about “prot”: He’s an asshole. He speaks in a cloying, soft voice with no “ums” or “ahs,” and questions or lightly dismisses almost everything that happens in his presence. “‘Have a seat’ … curious expression.” “That’s something we’ve known on K-PAX for millions of years.” “What Einstein actually said is. …” “‘Family’ would be a non-sequitur on our planets it would on most planets.” He says people’s first names after everything he says, with condescending emphasis. He’s like a diet version of Data. A kid in the movie even says, “Wow, he looks like Data,” as if the screenwriter was trying to make light of the fact that Spacey’s character is clearly a much-shittier version of a pre-existing ones.

What we ultimately get with K-PAX is a film trying hard to jerk some tears; spare, melancholic piano music seeps in, frequently, to try to bully us into it. Of course, the roadblock here is that K-PAX boasts exactly zero likable characters. Jeff Bridges’ doctor is as much of an asshole as prot; he makes fun of his patients and laughs about them with his fucked-up family outside of work. He’s self-absorbed, and disowned his son. He says “K-Pagth.” All he can do with his time is think about prot, and go back and forth about whether he believes this bald guy with sunglasses could actually hail from a distant planet where cumming is unbelievably painful.

Bridges puts prot into hypnosis for most of the film’s second half, and determines that he is the paranoid-delusion of a renegade murderer. The movie leaves us with no clear answer — where’s K-PAX 2, eh? “I will admit the possibility that I am Robert Porter if you admit the possibility that I am from K-PAX,” Porter-prod intones cryptically. Then, the money line: “Now if you’ll excuse me, I have a beam of light to catch.” prot leaves Robert Porter’s body (maybe), and Bridges is inspired to reunite with his estranged son, played nearly silently by AARON PAUL, bitch!

Certainly, a good cue for the credits would have been “Do You Believe in Magic,” but unfortunately, we’d already been treated to “Rocket Man,” so it probably would have been a bit much.

What I mostly learned from K-PAX is that Kevin Spacey’s aura has been forever tainted by his stint as Frank Underwood. I could not recall and revel in this simpler, Southern-accent-less Spacey — maybe because his character is terrible, and maybe because now I can’t see anything but terrible in him anymore.

I also learned that K-PAX is an aimless and often incoherent movie. I learned that it came courtesy of the same directional mind that brought us the garish Hackers and Kate Hudson-fronted New Orleans horror-thriller The Skeleton Key.

But I also learned that K-PAX still hangs together better than the last season of The X-Files. It’s a hard moment in an X-Files fan’s life when he or she has to say: “Chris Carter could really have learned a thing or two from K-PAX.” Yet, today that day came for me.

Season 4 of House of Cards premieres in a week, and we’ll be seeing more terrible X-Files in a year or so. And, as prot prophesies in the final moments of the film: “The universe will expand, and then it will collapse back on itself, and then it will expand again.” Time is a flat circle.