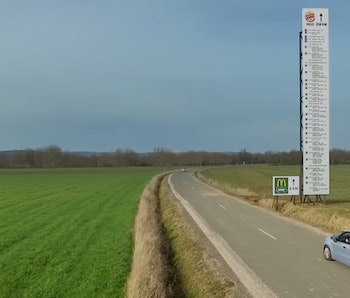 In France, McDonald’s just trolled Burger King in a wonderful, albeit possibly gratuitous, way. And this wasn’t some tired, overused trolling method: this was unique, creative, and downright impressive.

The video claims that, while there are over 1,000 McDrives in France, there are only 17 Burger King drive-throughs. With an advantage that stark, it’s a wonder they even feel the need to advertise. Then again, that’s classic troll behavior: carry out actions that are both indecent and wholly unnecessary.

More like this
Culture
13 hours ago
The End of the Cold War Could Have Killed James Bond. Instead, it Made Him Stronger.
By David Grossman
Science
11 hours ago
The Weirdest Sci-Fi Apocalypse on Netflix Reveals a Controversial Field of Medicine
By Tara Yarlagadda
Gaming
11 hours ago
Hogwarts Legacy Release Dates, Early Access, and Preorder Bonuses, Explained
By Jen Glennon
LEARN SOMETHING NEW EVERY DAY.
Share: