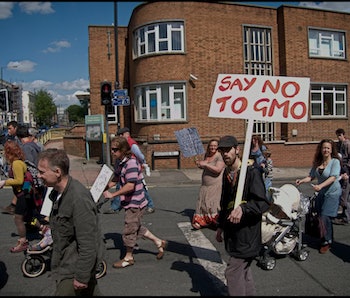 Do you dread going grocery shopping? Yeah, me too. It’s always worth it at the end of the day to be able to, you know, eat. But mustering the will to get in there, get what I need, and get out is something I may avoid for weeks at a time. I’m not going to say I found an app to solve shopping, but it does get a hell of a lot more gratifying with Buycott. With it, you can figure out which multibillion-dollar corporations are behind the food you’re buying. Scan the barcodes, learn about the companies that are trying to feed you.

Buycott actually got me off the couch to go shopping. Here’s what I learned.

Before you scan products, Buycott has you select the campaigns that will influence your grocery shopping. I subscribed to “Demand GMO Labeling,” “End Animal Testing,” “ClimateCounts Save the Blue Marble,” “Boycott Chocolate Produced by Child Slaves” — after all, who’s pro-slave labor? — and a few others. After subscribing to a campaign, you choose where you stand on the issue by marking how moderately or strongly you feel. The picture of a Fennec fox for “End Animal Testing” swayed me to increase my level of support because Fennec foxes are freakin’ adorable.

After the initial subscription process, I was taken to the global home page where I could see what kinds of items people around the world were scanning, the amounts of money Buycott users were diverting from corporations, and messages users sent to corporations concerning their unconscionable practices.

Now it was time for me to scan my first item. Finding myself in the fresh produce section at the grocery store, I decided to test the app’s abilities on some bulbous, delicious-looking mushrooms. The barcode scanning function works perfectly and quickly on Buycott — you don’t have to worry about lining up the barcode and the scanning section perfectly like you might when you scan information on your credit card. Immediately after I scanned the mushrooms, this page popped up:

Based on the campaigns you signed up for in the beginning, Buycott users can find out which campaigns the scanned product supports and those it is in conflict with. That unholy red “1” under the conflicting category sure added some controversy straight away to my grocery shopping. After I tapped the conflicting tab, this page opened:

Apparently, the parent company of this specific brand of mushrooms is a member of the Grocery Manufacturers Association, or the GMA, which Buycott informed me opposes the labeling of GMOs. The first campaign I subscribed to on the front page was the “Demand GMO Labeling,” a currently pressing issue in the United States that probably had a lot to do with the creation of an app like Buycott in the first place. According to a Consumer Reports study from last June, 92 percent of Americans support the labeling of GMOs, yet food producers have resisted. I returned to the previous page and hit the “no” button underneath “Will you buy this product?” After that, I had the option to send a message to the parent company (in this case Giorgio Foods, Inc.) about why they’re terrible. But wait! There’s so much more. Buycott users can view potential alternatives to the scanned product that coincide with their beliefs, as well as an overview of the parent company and a nifty family tree that shows from whence this corporation came.

To test the true efficacy of the app, I wanted to find a product that would offend more than just one of the campaigns I had subscribed to. I made my way to the frozen section to get my hands on some prime manufactured goodness — Häagen-Dazs dulce de leche ice cream. Buycott told me Häagen-Dazs donates huge sums against GMO labeling campaigns, continues to get its chocolate from areas of West Africa where child slavery still exists, and tests products on animals at some stage in their manufacturing process.

No leche is dulce enough to offset all of that.

Another page offered some alternatives that matched the beliefs I indicated in the beginning.

After I had made a few assessments of my potential purchases, I had the option to view my own profile, which is a broad overview of my recent activity. As you can see, I successfully diverted money from Giorgio Foods, Inc. when I chose not to buy those ‘shrooms.

Buycott is not only handy, it gamifies groceries. It’s incredibly straightforward, useful, and borderline addictive. The reason? It’s legitimately inspiring. Buycott made me more aware of where my money goes and of the ramifications of supporting certain companies. For people who already do invest considerable effort in learning about the food they eat, Buycott will be the quickest way to align their spending — and their bodies — with their ethical convictions.