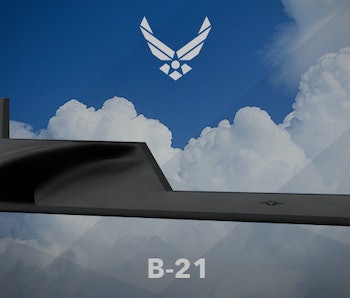 You’re no doubt familiar with the look of an American stealth bomber.

It’s that “flying wing” design by Northrup Grumman, a black triangle that cuts through the air just as effectively as it cuts through radar signals, remaining hidden and out of sight to enemies as it carries out its defensive and offensive duties. It doesn’t look like it should be able to fly at all, yet it does.

Now there’s a better, faster, stronger one on the way, called the B-21. The concept design was revealed this morning, and it will ultimately replace the B-52 bomber, a staple of airborne American military efforts since the 1950s.

As the cosmetics are more or less identical to a B-52, the secret sauce and improvements in this airplane lie with the technology within this enigmatic shell of a vehicle. The name of the Air Force’s game with respect to the B-21 is to fill it with next-generation technology at a price that won’t leave the American taxpayer aghast.

Speaking at the 32nd annual Air Warfare Symposium and Technology Exposition in Orlando this morning, Air Force Secretary Deborah Lee James said, “We were able to reduce costs for the extremely high frequency communication program by about 41 percent. If we can get the right price tag, if we can leverage innovation, then we can [make every dollar count]. The bottom line is that numbers count, innovation counts, and speed counts.”

Names also count. Right now the techno-loaded death machine is referred to as “B-21,” which is decidedly unsexy. The military will hold something of a branding competition amongst its enlisted airmen to give the airplane a more palatable name, along the lines of the “Spitfire” or “Tomahawk” from aviation history.

“So we have an image, we have designation, but here’s what we don’t yet have — we don’t yet have a name. This is where I’m challenging and calling on every airman today,” said James. “We’d like all of you to give us your best suggestions for a name for the B-21, America’s newest bomber, and in doing so we hope you’ll take the opportunity … so that we can all learn the important role that this platform is going to play against the real threats we’re going to face.”