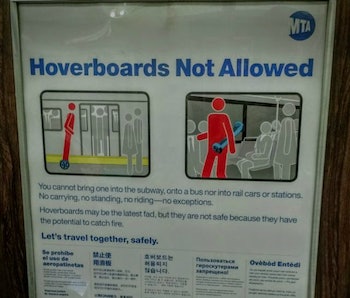 Hoverboards, the two-wheeled transportation fad sweeping the nation, are now banned from the New York City subway and bus system. The Metropolitan Transit Authority’s famously generic warning posters informing the public of the new rules are below.

For whatever it’s worth, hoverboards have already been deemed illegal within New York City’s five boroughs. Trendy though they may be, the devices have a problematic trend all their own: catching fire and exploding due to faulty manufacture. Packing people nose-to-nose during rush hour has its own safety concerns, but when some of those people might also be carrying accidental firebombs, the danger is real.

Here’s the knockout punch regarding the ban, delivered in the MTA’s formal statement:

Hoverboards are regulated by the U.S. Pipeline and Hazardous Material Safety Administration. The Administration recently issued an alert “under certain conditions, lithium batteries can pose a heat, fire, and explosion risk,” and found that 80% of hoverboards in a study did not have proper certification of battery testing.

Here’s a look at the sign, provided to the media by the MTA:

Along with subways, the MTA has also reminded New Yorkers to keep their hoverboards off buses, too:

And if hoverboards have been banned, what next?