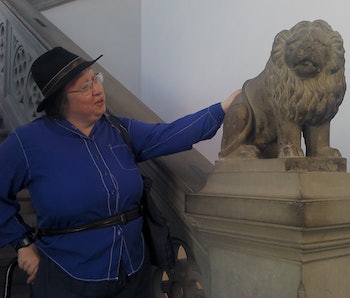 In Ask A Prophet, we probe the brains of sci-fi, fantasy, and speculative fiction writers. This week, we spoke to Jo Walton about her world-building, why the concept of patronage is still going strong, and more.

Your books like Among Others are not what one would call “hard” sci-fi or fantasy, but rather incorporate fantastical elements in real-world settings. On the other hand, some of your books are more overtly fantastical. What makes for more difficult world building?

Every story needs its own world. I don’t see a sharp line — all of those books have worlds that connect to our world. The line for me is when you’re writing secondary world things, which I have done in some other books, like Tooth and Claw and The King’s Peace, where it’s all made up.

The world-building difference is that when you write in our world or something close to it, it gives you immediate connections and reader investment. The reader comes along already caring. That can be good or bad, but you have to be aware of it. With something all made up, you have to work harder to get the reader to care.

And of course, in the case of the real world, people can check things. If you get it wrong, the reader will get annoyed with you. If you say there are 13 pennies to the crown in Elquin in the reign of King Kilis, that’s odd, but your choice. If you say there are 13 pennies to the shilling in London in the reign of Queen Victoria, everyone knows you’re wrong, and it had better be established right away as an important part of your alternate history or many people will abandon the book. So you have to check things.

But on the other hand, that’s a plus — you can go and look things up. I tweeted once, “You can’t google alien gods” because I was writing a scene with Apollo and an alien god, and I had all these Google Image search pictures of Apollo, as imagined at various times. For the alien god there was nothing but my own imagination. It can be hard to get the same resonance.

But when you integrate the fantastic into this world, there are a whole bunch of issues — for instance, if it was really there, why didn’t the reader notice already? They’re not stupid. If you offer them a world where they’d have to be stupid not to notice the magic going on, then I don’t know why they’d want to read that story. I certainly don’t, when I’m the reader. So in Among Others, I very carefully made the magic non-falsifiable.

Where do you draw inspiration from? What are your own favorite books or shows?

My inspiration comes from history. Places, too. Sometimes people. But mostly history. As for my favorite books, I blog about them on Tor.com and a lot of my blog posts have been collected in the Locus Award winning book, What Makes This Book So Great. I’m very fond of C.J. Cherryh, Lois McMaster Bujold, Karl Schroeder, Ursula Le Guin, Steven Brust, Robert Heinlein, Pamela Dean, and among recently emerging writers Sofia Samatar, Ada Palmer, and Daniel Abraham. I’m very exciting about Ada Palmer’s series Terra Ignota, the first volume of which comes out this May, Too Like the Lightning. I love those books.

In Suetonius’ Life of Domitian, he mentions that Domitian had a child with “a prodigiously small head” who dressed in scarlet and would sit beside him at gladiatorial contests, and he would consult the child about important matters like appointing governors. I read that and I thought “probably an alien.” It’s just how my mind works. So, if Domitian had alien advisors with very small heads, where can I go from that?

The other thing recently is the concept of patronage. The patronage system in the Renaissance is absolutely fascinating, and the way art interacts with power and status and scholarship. I’ve been reading a bunch of books about this recently, because it’s so very much not the way I imagined from a superficial knowledge of this kind of thing. The way it did work is just so interesting and full of potential. And it connects so interestingly with the whole emerging situation of modern democratized patronage — Patreon and Kickstarter and Etsy and this whole new model. It’s very exciting.

Have you been surprised that your magical realism novels have been embraced by non-genre fans as well as genre fans? As public interest in sci-fi and fantasy grows thanks to the mainstream popularity of things like Game of Thrones, what do you think is its future?

I was very surprised. Among Others was my ninth novel, and nobody had been interested in the other eight except the kind of people who read fantasy and science fiction, so I wasn’t expecting that at all. And with My Real Children, which is alternate history, I was very surprised when it won the RUSA Award in the category of Women’s Fiction at the American Librarian’s Association. It was a crossover with women’s fiction, but I was very pleased and surprised that people on the other side of that line also liked it.

I have no idea what the future is for anything. My plan is always to write the books I want to write and then hope people who want to read them will buy them. Fantasy is a very broad genre, with some huge bestselling books in the middle and some very strange and unusual outgrowths around the edges. What I hope for the future is that those unusual things will flourish and find their friends and people will keep doing new wonderful and different things.

The third and final book in the Thessaly series, Necessity, comes out in July. I’m working on a new nonfiction book How to Love Science Fiction, which is a kind of personal history of the genre. And I’ve just started a new novel about Savonarola called Lent, which is kind of historical fantasy. I’m very excited about that, as I always am when I’m just getting going on a project.

More like this
Entertainment
5.16.2022 12:00 PM
29 years ago, Marvel unleashed Spider-Man’s scariest enemy ever
By Richard Newby
Entertainment
5.3.2022 12:00 PM
How the "Mother of Yoda" conquered Hollywood — and why she disappeared
By Falene Nurse
Science
5.15.2022 7:00 PM
200 years ago, this terror of the Amazon inspired the world’s first batteries
By Timothy J. Jorgensen and The Conversation
Related Tags
Share: