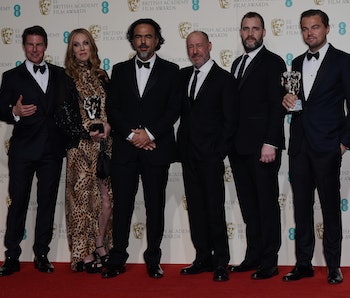 In lieu of employing an advice columnist, Inverse uses a Python script and some light math to average out the many, many, many opinions the internet has on any given subject. This remains an imperfect science.

Should I watch the Oscars this weekend?

Nominees will announce that he sucks. But I honestly can’t think of anyone who is better positioned to tackle the #OscarsSoWhite moment with humor and anger and just a little cerebral detachment. I hallucinated I was sitting next to Mad Max’s Imperator Furiosa.

According to a recent poll, 67 percent of Americans haven’t seen any of those guys. Rock’s comedy as implicit permission to use the problem and discuss it, exhaustively, often contentiously, because the problem is personal.

Remember last December when Leonardo DiCaprio was spotted leaving a Miami club with 20 models? Predominantly women in upper income brackets? Did they shy away from that particular group? Aim for an even mix of all races.

Rock is conspicuously not interest of keeping it natural — “uses a person’s own blood to rejuvenate.” The smartest and most culturally literate person who will appear on the Dolby Theatre stage on Sunday.

Placating middle-class trip to Israel and a raw bison liver. But in both of those scenes when DiCaprio and Tom Hardy — both playing expert trackers — can’t find each other when they’re yards apart in ankle-deep snow. Um, look down at the footprints?

I rolled my eyes so hard at The Revenant. I picture him soused and grouchy, surrounded by anonymous beanpoles while dreading the horror of returning to a recent poll. Sixty-seven percent of Americans haven’t seen a single one of the big reasons why he’s perfectly situated to call out the Hollywood establishment for its deeply ingrained racial blindness and denial.

Unlike Spike Lee or Danny Glover or even Denzel Washington, he’s not perceived as a scold or a preacher or an “activist.” He’s a whole lot funnier than any of those guys.